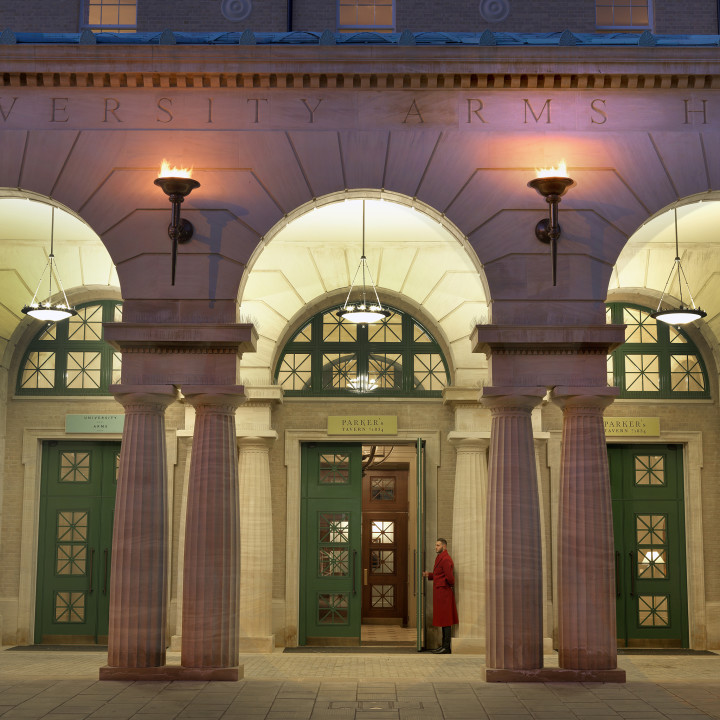 The University Arms, Cambridge: “Grand but not oppressive”

Whenever I go to Cambridge, I feel as those who didn’t go there tend to do – that I should have done so. The missed privileges amass about ten minutes from the station: here, Watson and Crick cracked DNA; here’s where Milton might have sat, or Marlowe got into a brawl, or Wordsworth had a thought or two; here are the streets where, in his twilight years, Stephen Hawking used to be seen, motoring in his wheelchair, a symbol of what’s possible for the human mind.

It’s a city of ghosts in other words – but clever and consequential ones. The initial impression is that whatever else might be going on the world, Cambridge will continue on its intellectual way, helping us understand the world better. And it does all that while being beautiful.

The University Arms has a good claim to be the best hotel in town – a stone’s throw from the Tudor and medieval architecture, and a short walk from the Cam too, where students still punt the summer afternoons away, as if this were an Evelyn Waugh novel. King’s College, with its marvellous ceiling of perpendicular Gothic, would be worth coming here for, even if there was nothing else to see at all.

The hotel has a grand but not oppressive feel. The rooms on the top floor are spacious, and have relevant books by past luminaries. The views over Parker’s Piece show a wedge of grass where students mill and loll, and look reluctant – especially on a gorgeous summer’s day – ever to let any day end. When I return from dinner, I find many hanging on in the dark, peeling away only when the very last light has departed.

Work-wise, Cambridge is already far more than the satellite of London it used to be; in fact it’s regularly found to be the UK’s fastest growing economy, and benefits from industrial parks which house global leaders in wireless technology, display technology, and mobile telecommunications.

And the city knows it. I attend an interesting dinner and find myself sat next to BBC Cambridge presenter Chris Mann, whose every syllable of talk breathes a love of the area. ‘Everybody here is on TV – a lot of the TV executives either went to the colleges or else they come here in honorary positions of academia,’ he explains.

A case in point is Tristan Welch, who heads the offering at Parker’s Tavern, and who cooks us a mean Spaghetti Bolognese – he is now the beneficiary of various TV deals, although he gives no indication of its having gone to his head. ‘He’s quite famous now, but he’ll be a lot more famous soon when Cooking with the Stars airs,’ Mann explains.

This trend for celebrity continues beyond the walls of the University Arms. When I mention the need to bring home a gift to my family, Mann directs me to Fitzbillies in Cambridge, world famous for its Chelsea buns. Its owners Tim Hayward and Alison Wright are also television personalities. Fitzbillies, founded around 100 years ago, was nearing closure a few years back, when this predicament was tweeted into submission by Stephen Fry, that other Cambridge alumnus. The place stayed open. Today, the buns, soaked in maple syrup, are indeed memorably delicious.

But Cambridge isn’t only about the university. The longer you spend there, the more you sense another life – perhaps a truer – weaving in and out of the streets. It might be an intellectual city and one which is experiencing its own tech boom, but there’s also poverty here, and not a single Conservative councillor on the City council. So that as a visitor, there’s the sense that you’re not seeing the whole story.

While the university is there, as an energy to be drawn from, it is also continually shutting you out. There is, for instance, an increased number of Do Not Enter signs barring you from the culture of the place; it used to be easier to walk in and see the splendid gardens behind King’s, or Pembroke, always one of the loveliest colleges.

But as a visitor it all feels so forgivable – a feeling which in itself probably perpetuates the inequality. But what Florence is to Italy, Cambridge is to the UK – a place where nostalgia is permitted free rein, and where the mood is aspirational in the highest sense: it makes you want to be a world-historical figure immediately.

It has an astonishing amount for a little town. The art collections at the Fitzwilliam Museum are richer than one expects one has a right to, even here. There’s a renovation taking place in one of the impressionist rooms but still there’s a superb selection of Renoir, Monet, Degas and Cezanne. The Renaissance rooms house Titian, Brueghel and others.

Meanwhile, Kettle’s Yard, the house of Jim Ede, always one of the best art experiences in the world, has renovated itself recently – bringing more jobs with it.

So yes, although the visitor will likely think they should have gone to Cambridge for their degree, there’s considerable solace to be found in the next best thing: going there at all.