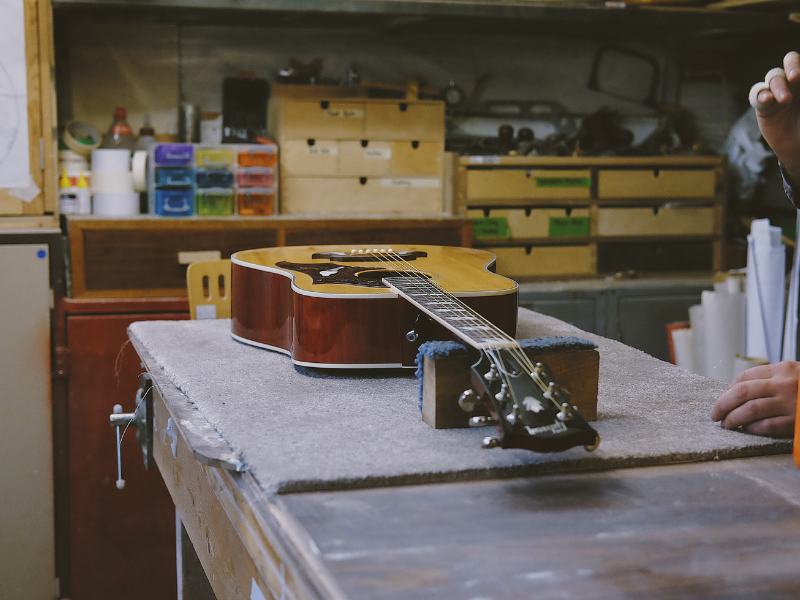 The Luthier’s Tale: Inside the Guitar Repair Industry

Veteran guitar tech John Armitage shares his thoughts about life on tour, professionalism, and getting started in the industry

The music industry conjures up images of spotlights, adoring fans, and late nights on the tour bus, but behind the scenes there is a world of technicians who keep the show running smoothly.

John Armitage began repairing guitars in 1978. Since then, the job has taken him all over the world with groups such as Iron Maiden, King Crimson, and the Manic Street Preachers. Now he operates Guitar Hospital, which has workshops in London and Whitstable.

Armitage got his start in guitar repair at 17 when he saw a problem and took the initiative.

“I started off as a drum tech for bands, then everyone went to America and didn’t take the drum techs,” Armitage says. “I was playing bass in a band by this point and they said, ‘I’ve got a guitar guy who can’t come’. I said, ‘I can do that’.”

Armitage also recalls a show in New York where the guitar player requested a new nut – a piece of dense material that the strings rest on at the top of the neck. “I didn’t know what a nut was, but I headed down to Sam Ash (music shop) and said, ‘I need a nut for a Fender Strat’.”

The man behind the counter asked him, “Do you want pre-cut, bone, carbon, brass, graphite, what gauge do you want it cut to?” Thoroughly confused, Armitage told the guitarist that the store had run out of the part he needed.

Taking this experience as a sign that he needed to learn more, Armitage took a trip to his local library where his excitement led him to some light crime.

“There was this big tome of a book with pictures, a real 70s masterpiece, and I wanted it forever,” Armitage recalls. “So I put it in a garbage bag and threw it out the window. It’s my eternal shame, I stole the best book because I was so eager to learn.”

Thankfully, there are other ways to enter the world of guitar repair. Schools such as Guildhall and the Totnes School of Guitar Making offer months-long traditional classes, while short workshops are a more cost-effective option.

Armitage advises people who are interested to “do a short course” to “get a taste” of the work, before committing to a more extensive programme. He also pointed out that business sense is every bit as important as technical skill.

Talking about the touring life, Armitage says that it is an incredible opportunity, even if it is not for everyone. “It’s about being constantly relocated, waking up never knowing where you are. It’s more of a young person’s game. It’s brilliant if you can get into it and cope with the constant relocation.”

A touring guitar technician will have their travel and accommodation paid for and can expect to be paid for every day they are away from home. The demanding, exhausting schedule comes with the benefits of free travel and unforgettable experiences.

“I have lifelong friends who I met in 1980,” Armitage says. “I met my wife on tour. There’s a whole world out there that you can see for free – but it’s not a vacation.”

According to Armitage, a good guitar tech on tour with an in-demand group can expect to earn £80,000 to £100,000 a year. If the touring life isn’t for you, base pay starts at about £30,000 a year according to Glassdoor. Armitage says that success in the industry is based on time served and word of mouth.

A touring technician needs to exude a sense of calm, confident control to be successful, and sometimes even take on the role of a counsellor. “I’ve listened to divorce stories, people going off the rails, you kind of have to be a sounding board,” Armitage says. “Nothing can phase you, no matter how weird the request is. They’ve hired you to take away their stress, not add to it, so you can’t buy into panic.”

After years on tour, maintaining and repairing guitars for bands on the go, Armitage decided to open his own repair shop. “I started the Guitar Hospital about 10 or 12 years ago. It was a side hustle then, because I was touring a lot more working for big bands. Gradually I knew I couldn’t do that forever.”

He describes his current day-to-day work in a peaceful way, saying that now, “It’s just me, a cup of tea, a radio, and a pile of guitars that need attention.”