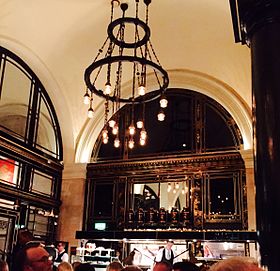 During the pandemic, I found myself having a delightful conversation with Jeremy King – the King in Corbin King, the chain which owns The Wolseley, The Delaunay, Colbert and numerous other favourites in the capital. He told me that due to Covid-19, people had become ‘entombed in their homes’.

It was the sort of intelligent phrase that makes you know you’re talking to an intelligent man. And, in fact, intelligence is the secret ingredient which makes Corbin King a cut above the rest.

On arrival, I find that there are plenty of people who agree with me, many well-known. If you want to celebrity spot, I’d regard the Wolseley as a better bet than the Ivy. My eye lands on the former secretary Amber Rudd, and then at a different table ITV’s Robert Peston talking to someone who looks as though he might be Toby Young. As I deposit my bag, I look up to see the Earl Spencer gliding past me to his seat.

This used to be a place where you wouldn’t deposit your bag; you’d make a deposit. My companion, well into his eighties now, recalls how it used to be an important branch of Barclay’s. This dispels some of the mystery surrounding the architecture of the place which has often reminded me of a chapel; in fact it was a kind of cathedral to our contemporary god, money.

The place is happier as a temple to food. We move to a side table, passing half of Who’s Who as we go, and look at the menus. As we’re doing so Jeremy King comes over looking immaculate and cheerful and tells us the good news that business is back.

We select the oysters and I recall the portrait by Lucian Freud of Jeremy himself. Freud apparently always took the same table – not so far from the one where Rudd is sitting today. On the day of his death, Jeremy draped it in black crepe.

We order oysters, and soon twelve Colchester natives come to us on an icy platter. They slip down perfectly with lemon and tabasco sauce. I could live a long time and never get over the glory of a Wolseley plate of oysters; my companion, in his ninth decade, confirms that it is indeed a reason to keep going.

The Wolseley continues to produce food of high quality without slipping into pretentiousness. For the mains, my companion plumps with a kind of cunning for the Kedigree with Poached Eggs. When it arrives, he pronounces it delicious in a voice which could live forever. I, meanwhile, opt for Roast Corn-Fed Half Chicken morels and Madeira sauce.

This was a triumph. Most of all it is wonderful to think, after what the Wolseley team has been through, how decisively it’s come out the other side. Entombed in our homes no longer, we walk out, nodding cheerily at the Earl Spencer on our way out. Caught up in his own post-prandial happiness, he waves back.