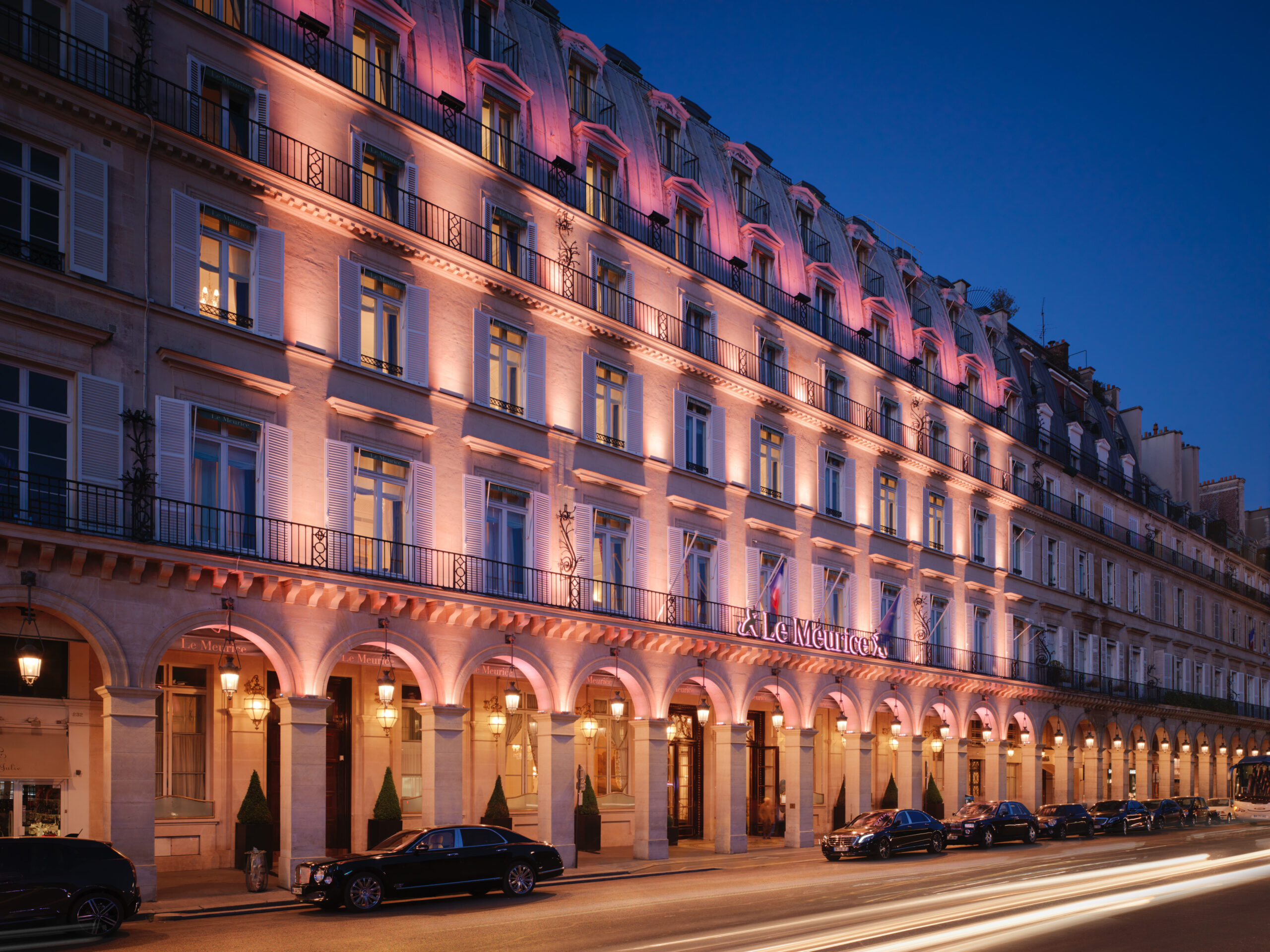 Paris Resusscité: A review of the Hotel Le Meurice and Hotel Plaza Athenée

Before the Covid-19 pandemic struck, I used to go quite regularly to Paris. I was always happy to go, but a small part of me would always think, as the Eurostar pulled out, “What a shame it’s only Paris. Wouldn’t I rather go somewhere new?”

But then the thought came to me: “You’ll pay for that one day.” And so I did. Confined to my home like the rest of us for the best part of two years, there were many times when pacing the familiar floor of our smallish London flat, I’d think: “I really, really want to go to Paris.” And so when I got the opportunity to go again, I decided I would make amends.

The Dorchester Collection has long been a favourite and on this occasion I was lucky to go to two hotels: Le Meurice and the Hotel Plaza Athenée. The first is right by the Place de Concorde, and enjoys a remarkable history. It was here that Salvador Dali would stay when in Paris (the breakfast ceiling is painted by him). Pablo Picasso even celebrated his wedding here. As usual in Picasso’s life, his wife would go onto to feel there was less to celebrate than she would have liked, but even so, from Bob Dylan to Andy Warhol, the place has the nack only an impeccably located and luxurious hotel can of attracting the very famous.

But if you ask yourself what the famous are coming for, it turns out to be quite a democratising thought because Paris, as the world knows, has its hold on all of us at one time or other. For myself, I must admit it’s a city which has grown on me over time. When I first began coming here, I found its layout too strict, and missed – without my quite being aware of it – the mess of London if I couldn’t have the greater history of Rome or Florence.

Of course, the other thing which subsides over time, is the sense of rush which you only stop feeling in a great city on your fifth or sixth visit. It is unthinkable, after all, on your first visit to Paris not to go to the Louvre, but quite thinkable and even desirable not to do so on your eleventh time.

This more relaxed approach to sightseeing has its potential disadvantages. I recall on my last but one visit in 2019, walking under cherry blossoms near the excellent bookshop Shakespeare and Company, and thinking very deliberately to myself: “Well, I won’t go into Notre Dame this time, as I know it’ll be there next time.” A few months later I was watching on television as that beautiful interior was destroyed by fire, and as French billionaires pledged to restore it. “It hurt,” says the Le Meurice receptionist simply when I give my belated condolences.

What sets Le Meurice apart from the many other hotels which claim an affiliation with a spate of historical figures is the genuineness of the history on the one hand, and, on the other, the sense that this is a hotel living in the present. The designs by Philippe Starck amount to a brilliant reimagining of the place’s past. There’s a mirror of frost on the right in the lobby as you go in which guests can draw on: it is, says Starck, based on “Dali’s playful spirit and love of mineral water”. It’s great fun. A marvellous picture above reception welcomes you, but you have to tilt your head to see it – and may not notice the warmth of the welcome at all: a Dali-like joke at odds with the essential seriousness of many high-end hotels.

Out in the city itself, Paris felt to me lighter than London – and far happier in itself than Italy would feel a few months later. It had had, like the UK, a miserable summer weather-wise, but even so it felt in its stride somehow: the crowds in the Tuileries seemed to be claiming for all time these last days of summer. It is a great thing stand than in the middle of the Place de Concorde, looking towards the Louvre in one direction and the Champs Elysees in the other. The benefit of an organised city is that you always feel oriented, while also enjoying the typical urban pleasures of being dwarfed by scale and beauty.

Around this time, my five year old began to complain about the idea of walking anywhere at all under the power of his own legs. This led to happy memories of walking down the Seine, with him perched on my shoulders, pointing in joy at a world which for him was suddenly a thousand times the size of what he’d thought it was. But then he’s now a pandemic child, and had been briefly labouring under the illusion that East Dulwich and the universe are somehow synonymous.

To see a city through the eyes of a child is to see it again. Besides, the cities we visit regularly become palimpsests where we are always experiencing the latest layer of our lives while also peeling back the previous ones – we get to know who we used to be by encountering who we are.

The little hut-like shops along the river, previously things to walk past, were now regular pauses along our journey to buy little trinkets, mini Eiffel Towers, and a welter of little gadgets. The funfair on the Place de Concorde was a place to glory in: my son tried most of the rides. But the best ride of all is the Eiffel Tower itself which I hadn’t been up since I was 18 – ten or so visits to Paris ago. From our second hotel – the magnificent Hotel Plaza Athenée – we had a view of it from our balcony overlooking the Avenue de Montaigne.

The French cubist Robert Delaunay used to paint the Tower from somewhere around here and the point he was trying to make is you never completely see it; glimpses are all you get. That’s true if you climb it too – but perhaps the precise detail of human experience is never as important as the fact that human experience is exhilarating. It certainly is to one five-year-old who’s not stopped talking about it since. Nor has he stopped talking about the Plaza Athenée. We were given a marvellous suite of rooms, and fell in love with the location of the hotel, its kindly staff, and its magnificent chandeliers in the breakfast rooms, now presided over by 39-year-old Jean Imbert, who recently took over from Alain Ducasse. (Ducasse’s exemplary food, and immortal hot chocolate are still a feature of Le Meurice).

Work-wise, Paris’ is an economy which reminds us a lot of London; it’s home to international companies such as BNP Paribas, Orange and Air France-KLM. Reasonably strong in banking and financial services, there were hints that it might make a play for London’s preeminent place post-Brexit, but that’s proven overblown. The place is probably stronger in luxury goods: Christian Dior is based here, it’s Tracey Emin-ish lights dominating one end of the Avenue de Montaigne, where the Plaza Athenée is located. There’s also a vibrant start-up ecosystem: Paris has the second highest start-up investment in Europe, attracting £2.5 billion in 2020, although in this it is dwarfed by London at £7.75 billion.

The art galleries of Paris remain arguably its biggest draw. I would recommend the Musée de L’Orangerie if you wish for an enjoyable experience which isn’t too beset by crowds. It’s also small enough to be doable without feeling you’re missing something. The Monets there are one thing – and quite a thing – but downstairs are masterpieces by Cézanne, Picasso and numerous others. You can do it in an hour and feel you’ve seen wonders, or spend much longer and not get to the end of it.

That’s in marked contrast to the Louvre, which is arguably the most intimidating building in the world. It is infinite. You could spend your life in it – but to add insult to injury if you’re there you’re not in the Musee d’Orsay, a museum almost as rich.