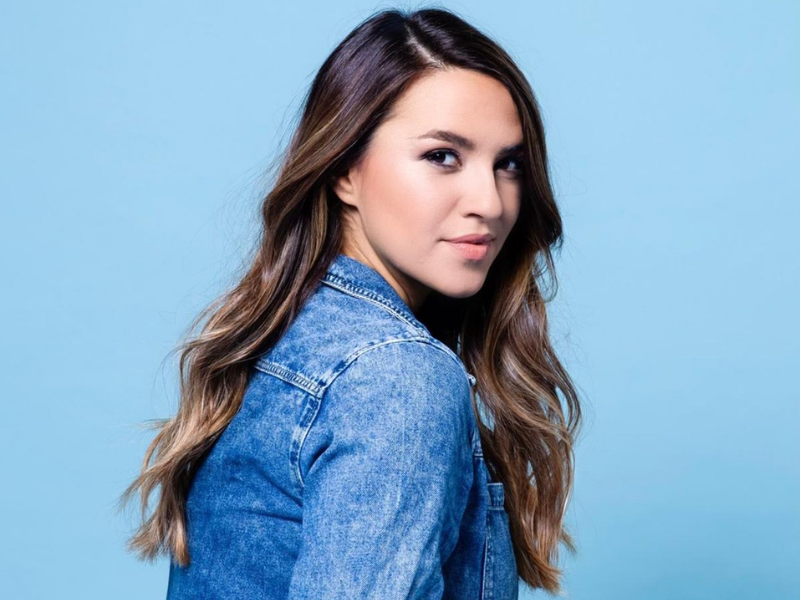 Meggie Foster: “Don’t wait for the phone to ring. Just do it yourself”

Meggie Foster has had a good pandemic. You may not recognise the name but if you have ever ventured onto Twitter or TikTok, you will know the face.

When the virus hit, the 27-year-old trained actor was working in an office. She dreamed of performing but because London is so “bliming expensive” and the industry is “crammed full” of talent she was working a 9-5 job hoping a door into the creative industry would somehow open for her.

Finally, furlough gave her the time to focus on her creative career and she started posting videos online featuring lip-syncs of politicians and celebrities, much to the delight of millions of people in desperate need of some whimsy.

One video, which has been viewed more than 1.5 million times, uses the audio clip of the home secretary’s April press briefing announcement, that there had been “300,034,974,000” coronavirus tests on one day. Foster lip-synced Priti Patel’s announcement while swigging from bottles of spirits and smoking throughout, before getting out a roll of clingfilm and attempting to use it as a facemask.

In another, which has received nearly 20,000 likes, Meggie lip-syncs an interview between ITV news presenter Tom Bradby and Meghan Markle in which Markle admits she struggles with life as a royal. Meggie’s Bradby plays the violin and Meghan wipes her tears with a £50 note.

She is in demand. Foster took a call from Robert Peston’s production company asking if she could come up with a video mocking his biggest blooper. She reenacted the awkward moment Peston appeared to say an expletive when the chancellor asked for his question during a press briefing.

Foster playfully presents the ridiculousness of people’s own words with her perfectly timed syncs, exaggerated facial expressions and costumes (which are often borrowed from her Dad’s wardrobe).

“I think it’s sort of an eye opener that you can actually do it yourself and not wait for the phone to ring. I was definitely that person to wait and see if anything would happen. I’d never sort of gone out there and done it myself and maybe that was because I was scared, ” Foster tells us.

Her apprehension about putting herself online is understandable, but thankfully, she has not encountered too much meanness.

She speaks with such buoyancy and enthusiasm, it is easy to believe that she would not be too disheartened by a few nasty comments.

“I have got quite a thick skin, I’m quite a tough cookie when it comes to stuff like trolls. I think if you don’t want to watch them, if you don’t find them funny then just don’t watch them or don’t follow me, it’s as simple as that. I am not really bothered what people like that think. Obviously if the majority of people were saying that but they’re not. The majority of people have been overwhelmingly positive.”

Despite her new-found online stardom, Foster is yet to feel the full force of her fame, she tells us from her family home in Oxfordshire.

“A few people sort of recognised me and things like that but because we have been in lockdown I haven’t been out too much and wearing a mask around, no one can see my face anyway.

“I feel like I am not famous because I have been stuck in my childhood bedroom, with my mum and dad sort of nagging me to pick up my clothes from the floor. So I feel like I’m back at school if anything but we will see. We will see what happens.”

When I first reached out to Meggie with an interview request in April, she politely declined. She later said she had taken the advice of her journalist brother and was composing herself before speaking to the media. Since then, the savvy comedian has featured in The Times and on Lorraine. Now she has an agent and is thinking about next steps.

“I do worry that it is getting boring. I know lip-syncing is funny but I don’t want to bore people now so I’m trying to spread my wings a bit and see whether there is any more life in other directions. Dreaming big I would love to have the Meggie show.”

Foster, who is continuing on her upward trajectory, has some advice for budding actors and comedians.

“I think my main piece of advice would be: do it yourself. Don’t wait for that phone to ring you know, you can create stuff yourself if the work is not coming to you, especially now when theatres are closed.

“If you have got sort of, I don’t want to be cringe, but a dream or a passion or something you want to get to: you can do it. You can create your own luck.”