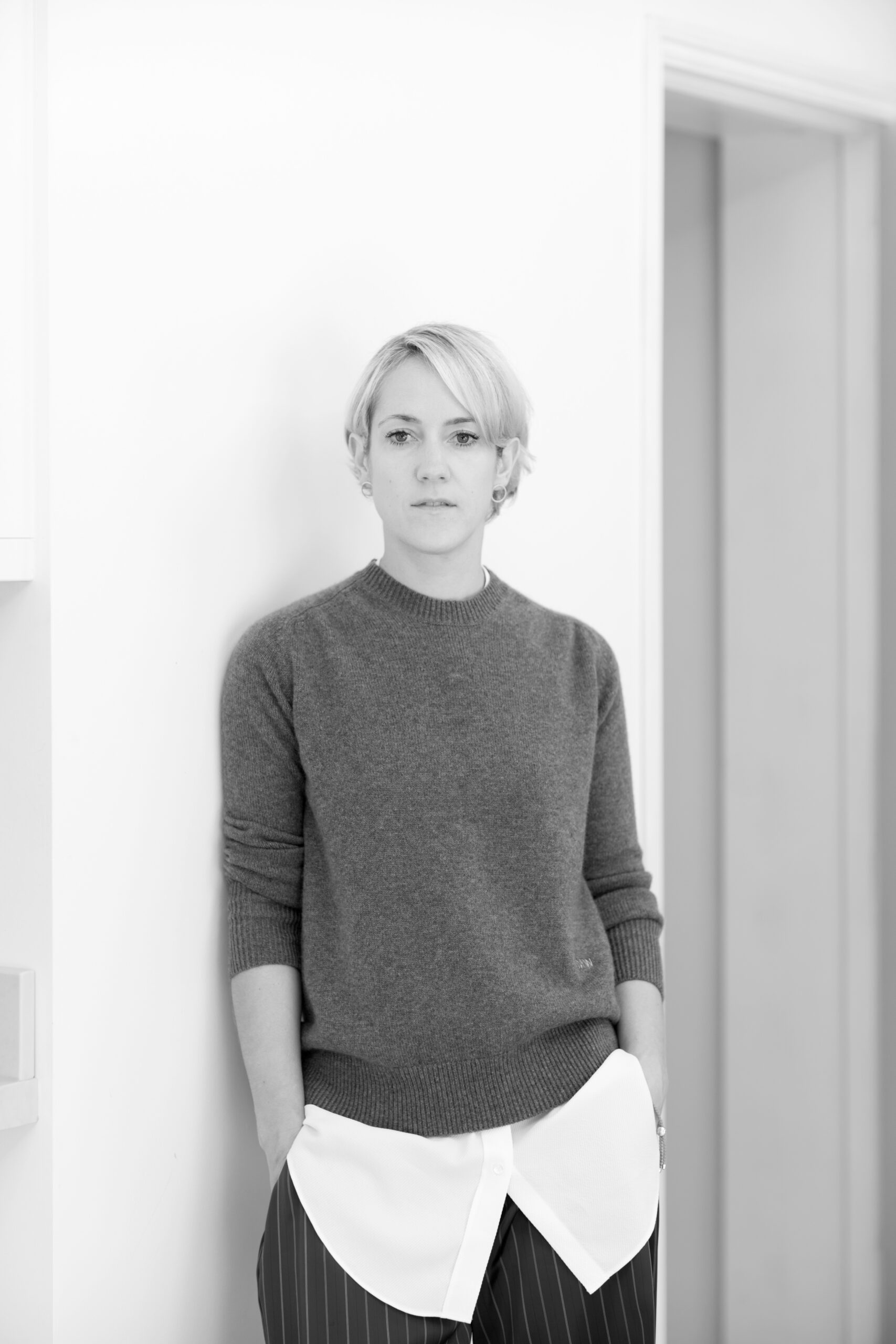 Melanie Walker discovered the world of art at a young age, but it took the pandemic for her to return to her first love of drawing. She worked in luxury fashion with big names, including Victoria Beckham, Roland Mouret, and Jonathan Saunders for fifteen years. Now, she has turned her attention back to fine art, launching a new website to promote and sell her works. We spoke with Walker about her passion for art, her time in the fashion industry, her unique style, and how young people can get a start in the industry.

“When I was at school, I always loved art, and I always loved to draw. In my A-level art, I then had an opportunity to think ‘what do I want to do next’, and I’d heard about art foundation courses. I applied to Wimbledon College of Art, and I got a place on their foundation course, which was phenomenal. And really, that was the first time in my life where I felt like I was surrounded by like-minded people. I loved school, I found academia okay, but my strengths were always in the arts. So suddenly to be surrounded by so many like-minded people who loved creativity, who loved visual arts, it was just fantastic,” Walker says.

Though Walker had a passion for fine art, she feared that it would be a solitary career, so she decided to go into fashion, specialising in the subject in college.

At Nottingham University Walker found that art history has more to do with the people in the paintings than how they were actually created, which is what she was interested in. So she took a year out to reapply.

“I ended up going to Bristol UWE and started studying fashion design there for three years,” Walker says, “And that summer that I took out I did an incredible summer course out in Florence, which was at the Charles Cecil studios. And that was phenomenal. It really trains your eye and it’s an intensive drawing school right back to plumb line drawing from Leonardo da Vinci. So that for me was a phenomenal experience where I was solely life drawing.”

After leaving Nottingham, Walker was determined to make the most out of her time at Bristol. She left with a first and quickly found an internship with Roland Mouret. There, she got her first real taste of the fashion industry working on their development team.

“I could see everything from the start of the conception of a dress, right through from development to production, and then on to sales, and then shipping. We had in-house press as well. So for me, as a youngster coming out of university, that was a phenomenal experience,” Walker says.

Walker worked in development with Mouret for three years. She enjoyed her first job outside of university, but she realised that she was missing the design aspect of her work, so Walker decided to change course.

“I decided to leave there, and I freelanced for a while with Jonathan Saunders, who’s a print designer, helping him out on development and production. And then I got my first design job, which was with FREDA at Matches,” Walker says, “So I freelanced on the two jobs for a while, and then they became too much. I chose the Head of Design role at Matches designing for FREDA purely because it was a design post. So then I worked there full time for a year as a designer.”

Throughout her years working in fashion, Walker kept up with Mouret. When she was ready for a change, he was there to help her into the next step of her journey with Victoria Beckham.

“I remember I saw him at a show one year and I said, ‘you know, I think I’m looking to move on’, and it was he who put me in contact with Victoria Beckham. I helped Victoria set up her label, and I ended up working there for, gosh, I think it was nine and a half years,” Walker says, “I was building the team, working with her, starting from such a small unit. It was an amazing experience, incredible experience. I’ve never been in a company that grew so quickly, and I felt like I was really being challenged, I learned so much.”

Many people face the same uncertainties in university that Walker faced at Nottingham, and a shift in direction during study is often stigmatised. Walker credits her conviction of will and the support of her parents with making the transition from art history a smooth one.

“I think my parents were perhaps concerned how I would earn money in fashion, just because it was such an alien area for them. But they were both extremely supportive, and I think that’s what enabled me to have the confidence. And I felt so strongly about it. It’s difficult when you’re young, you know, you have to get into an environment and understand whether it’s the right thing for you, but I really, really knew after a term that it was not the right area for me, and I really missed creating and making that tangible art, essentially -whether it’s drawing or whether it’s making clothing. So for me, it was a no brainer, and thankfully, I had the support of my parents to make that that change,” Walker says.

Walker’s time in the fashion industry led her to many amazing experiences and opportunities, but it also left little time for her passion of life drawing. After fashion, she went into consulting, which allowed her to make time for her children and her art.

“For me, life drawing, and drawing of the figure has been something that I’ve always loved. But once you get out into the work environment, I always found it so difficult to get to any life drawing classes. The hours in fashion are very long, I would be working late into the night most often, and I could never really make the classes,” Walker says, “So it was always just a hobby that I’d sort of parked to the side. Once I left Victoria Beckham I was consulting, and I have three kids now. So for me consulting was a way that I could work near my children, and fit work into my family lifestyle, it’s been great.”

Walker’s style is characterised by minimalistic, thoughtfully placed lines which imply the full shape of a figure while leaving some to the imagination. When she does use colour, it is usually only a splash to emphasise the most important elements of her artworks.

“I’ve always loved a pure line,” Walker says, “I’ve always been immediately drawn to really minimal charcoal sketch. So if you can imagine all of Picasso’s drawings that he does of a minimal bird or a figure, if I’m in an exhibition, I go straight to those. There’s also Giacometti – he creates phenomenal sculpture, but also really beautiful quick line sketches of figures or portraiture. So for me, it’s always been something I’ve been quite obsessed with. And I think it’s so beautiful when you see an image that is just drawn, and it’s the right line. It’s hard to do, but when it works, I think it’s really beautiful.”

Now, Walker is focusing on her new art venture, but she did give some insightful advice for young people hoping to break into the fashion industry.

“Don’t be shy about approaching people. If you’re trying to get an internship, write to ten different brands that you love, ask if there are any internships or apprenticeships open and be prepared to graft – you have to work really hard – be prepared to do anything from making the coffee, taking out the bins, or whatever might need to be done. I think if you’re open minded, and you work hard, and you have a good attitude, you turn up on time, anything’s possible,” Walker says, “I think people think that the fashion world is elite, and it’s a closed book, and you have to know somebody. But more often than not, it’s really easy to find email addresses on websites and just write to brands and ask if they have any openings, don’t be afraid to chase. And now that we have platforms like Instagram, it’s much easier to be able to reach people.”

A degree can go a long way towards success in fashion, but according to Walker, it is not the be-all and end-all you might find it to be in other professions. Rather, opportunities may come from internships, or simply talking to the right people and demonstrating passion.

“I think degrees are fundamental, to learn technical skills of making clothing and to progress as a designer, but they do not prepare you for the outside world in the fashion industry. So I think an apprenticeship is equally valuable. So for example, if you come out of school or art college, and want to gain an apprenticeship within a design studio, and then grow within that, that’s equally valuable. But a BA course or an MA obviously is held in high regard, and you do learn a lot on those courses. But I think gaining internships and insights into companies and experience is invaluable as well,” Walker says.