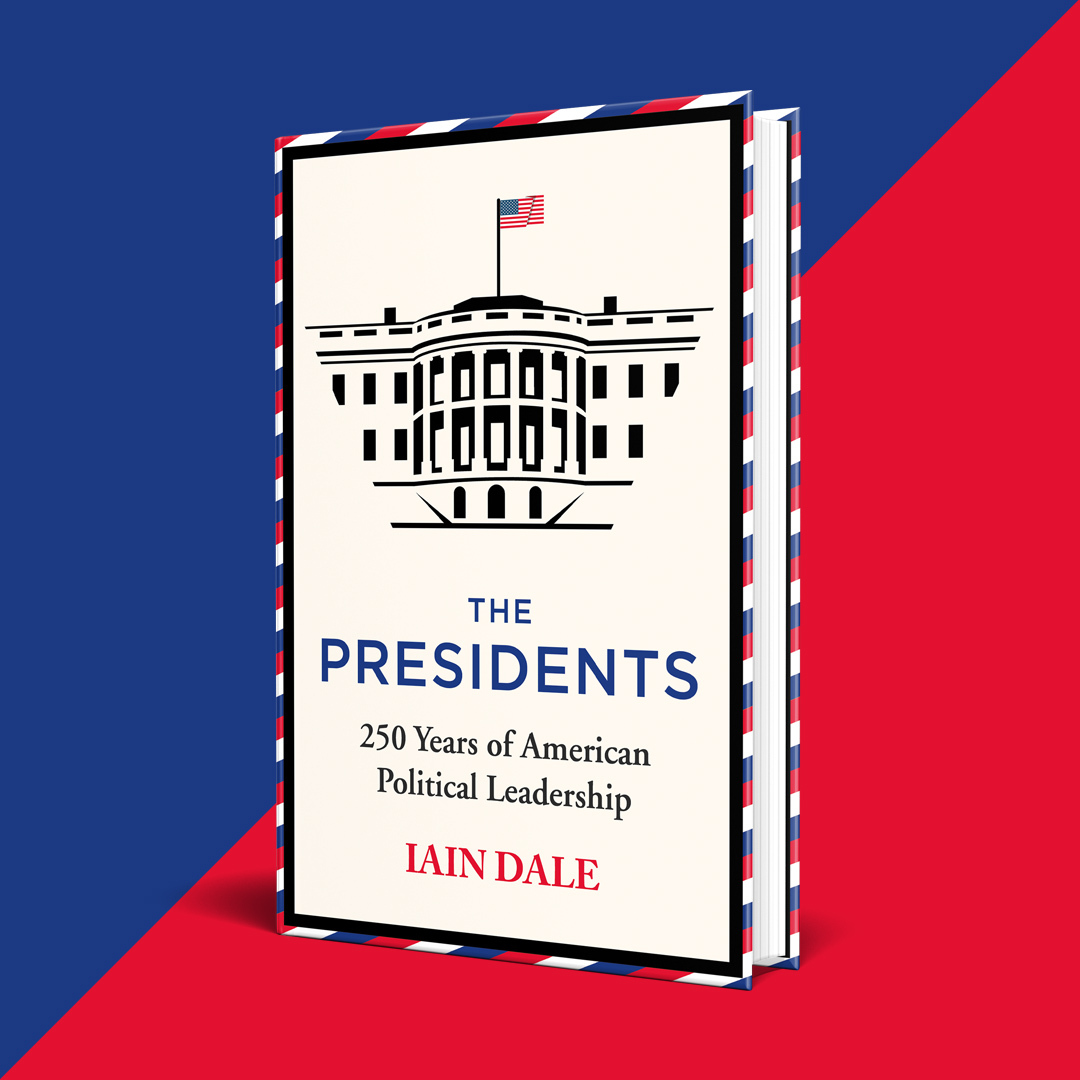 Why do we find ourselves so interested in Presidents? For many people the interest is really in the drama of their rise and fall. Enoch Powell’s line that all politicians end in failure remains true: every president arrives in office with such high hopes and the world remains just as fallen at the outset of their presidencies as it does at their beginnings.

That’s always been true but it feels a more and more urgent fact – and you can trace that urgency in Iain Dale’s book The Presidents: 250 Years of American Political Leadership, which is his follow up to a similar volume of British Prime Ministers. (Dale tells us that a third book on Kings and Queens is scheduled for 2023.) As you go through this book you feel that each president is becoming more contentious as our frustration grows at the gap between what they promised and what they actually achieved.

The idea is that each President, no matter how well-known or obscure, is the subject of an essay of around 5-10 pages. Highlights for me include George Osborne displaying a real fascination with Lyndon Johnson; an excellent – and very balanced – essay by Justin Webb about Donald J. Trump which must surely have been the hardest assignment in here; and a brilliant introduction by Mitchell Reiss on the first president George Washington, about whom I have always wanted to know more.

In general, the essays keep an academic or journalistic distance from their subject – sometimes, as in the case of Osborne, shading into fandom. One wouldn’t want to be without Osborne’s excellent essay, not just for what it tells us about Johnson but for what it tells us about Osborne. Another standout is a highly personal account by former British ambassador to the United States Christopher Meyer about George W. Bush’s presidency. When I spoke with Dale recently he explained that it was different to the others and that as an editor he faced a decision as to whether to do anything with it to bring it in line with the rest of the book. He made the right decision.

In this essay, we meet George W. face-to-face. Meyer writes: “He was friendly, open and unpretentious. He was smart.” Anyone who lived through the Bush years with its near-constant refrain that the President of the United States was stupid will hear the weight of that last word. This essay, and Osborne’s, will both be of assistance to future historians.

This book can be read sequentially, of course, but many readers will find the temptation to dip in and out too much to resist. It isn’t necessarily the case that when you’ve finished reading about John Adams you immediately want to read about Thomas Jefferson; why not fast forward and get a blast of Ronald Reagan, then swoop back, having basked in Reagan’s success, to get a sense of the disastrous regime of James Buchanan.

None of these presidents is really without relevance today – and some remain points of live controversy. Thomas Jefferson’s ownership of slaves continues to vex us, especially as he seems to have such a contemporary intelligence. Lincoln’s position as one of the greatest leaders in history is evermore assured with each passing year.

One interesting experiment is to begin at the end and travel away from the present. In one sitting I read the following essays in this order: Biden, Trump, Obama, George W. Bush, Bill Clinton, George H.W. Bush, and Ronald Regan fetching up a few hours later at Jimmy Carter. If you travel that trajectory you can see the world regaining its innocence, and partisanship receding.

It is a perennial fact of commentary today that presidents are always compared to their predecessors. Biden, the current incumbent, has been compared to many of these presidents at one time or other. When he was strong-arming the Senate into his infrastructure plan he was today’s Johnson; when he was doing Covid relief in his first 100 days he was FDR; and when he pulled out of Afghanistan he became Carter, whose company he has generally been keeping ever since.

And so on and so forth. So what does it all amount to? A book like this has its Shakespearean side – we see the quiddity of human material facing up to the currents of history and either succeeding or failing.

For the most part the historians in question, as they did in the previous volume, refrain from making any real judgements as to whether their subject was actually good for the country. They instead consider whether they met their objectives without us knowing if what they actually did was really beneficial.

This is to some extent made up for by an essay at the end of the book by Alvin S. Felzenberg called Ranking the Presidents. This, as always, turns out to be an exercise both too subjective and too objective. The criteria historians tend to select tend to be sufficiently banal so that one cannot easily object: Character, Vision, Competence, Economic Policy, Preserving and Expanding Liberty and so forth. Once you have created such broad categories your judgement is necessarily very subjective.

For instance, in the Liberty category, Obama has a score of ‘4’, and Trump a score of ‘1’. What does Obama’s 4 refer to? It is difficult to say since certainly from 2011 onwards after losing the Senate, Obama felt obliged to rule by executive fiat which cannot really be claimed to have expanded liberty. Is his score more to do with his personal achievement of being the first black President? That was a magnificent achievement, but it is difficult to be sure what the score is referring to.

Similarly, in respect of Trump, while his score of 1 in the same category is surely meant to (rightly) rebuke him for his role in the Capitol Riots in early 2021, the score makes me want to be pedantic and point out that lowering the corporation tax burden might also be taken as an increase in liberty if you view the previous level – 35 per cent – as having been onerous for small businesses.

So a book like this will more often lead to entertainment rather than depth. Narrative arc tends to be incidental and 40 or so writers writing independently won’t create a compelling argument – as, for instance, Gore Vidal does in his Narratives of Empire novels – where we see both a story told and an argument emerging.

But that doesn’t mean there isn’t a lot of fine writing here. There’s no use complaining that a book isn’t for sequential reading but for dipping into: the thing to do is to dip into it.