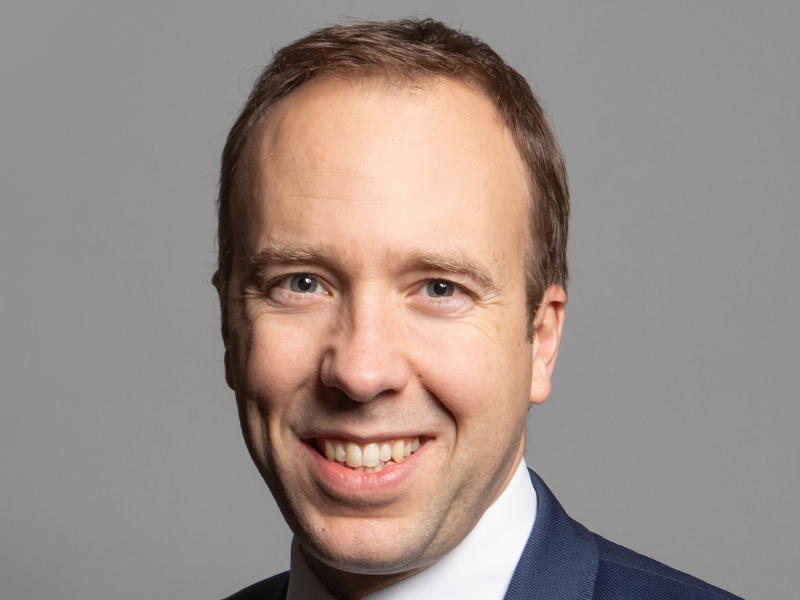 Exclusive: Matt Hancock on what he learned as Health Secretary

As Matt Hancock emerges from the jungle, he recalls his time as Health Secretary and offers lessons to the next generation

In the global fight against Covid-19, there has been one group of people who have sacrificed so much and yet received such little praise – young people. I understand how difficult it has been for young people during the pandemic. From not being able to study, to not being able to see friends in person and missing out on so many exciting opportunities, Covid-19 has been extremely difficult.

As Health Secretary, I was so grateful to young people for playing their part in the wider national effort. Because the virus is so much more deadly with age, the sacrifice made was all the more generous the younger you are. Without that sacrifice though, we simply wouldn’t have been able to suppress the virus and save lives. So from the bottom of my heart, I want to thank everyone who played their part.

As I look back over the pandemic, some of the greatest highs I felt were when I saw young people queueing in their swathes to get vaccinated. At sports stadia, at local pharmacies, or in places of worship, we saw individuals making the conscious decision to come forward to protect others. While some said it wasn’t worth the risk for them, the vast majority of young people have been vaccinated. Speaking to some University students who got their jabs, I was struck by the sheer selflessness of this generation. I was told that while they felt it was important to protect themselves from issues that come from long Covid, the main reason why they were getting vaccinated was to protect their friends, loved ones and the wider community. The generosity and open-mindedness of these students gave me huge confidence for the future of our country.

So, young people have sacrificed formative parts of their childhood and got vaccinated to protect others. I will not accept the failed argument that young people are lazy and selfish. In fact I think it’s quite the opposite. For me, young people have been the quiet heroes of the Covid war.

Now it’s fantastic to see 12 to 15 year-olds coming forward to get their jab in such large numbers. Recently, we reached the impressive milestone of over one million 12 to 15 year-olds having had their jab. I urge all children who are offered to come forward and get theirs, to protect themselves, their educations, and people that they love

Continuing in the spirit of selflessness, it shows the spirit of this generation that last year, there were record levels of applicants to medical schools, and nursing qualifications, in the UK. This is so promising for the future of our NHS, but also for the possibilities that this brings for future scientific discoveries.

We’ve seen as a country just how valued our scientists and healthcare workers are.  For instance, a YouGov poll this year showed that scientists and doctors were the most respected professions in the UK. I was also very emotional when I saw the video of Professor Sarah Gilbert from the Oxford vaccine group receiving a standing ovation at Wimbledon. From seeing closely how hard Sarah and her team worked to create their vaccine, I couldn’t imagine someone who deserves the whole world’s gratitude more than her.

Think about this team of scientists at Oxford University who dedicated their lives to creating the global cure for the pandemic. I gave them the ambitious mission of creating a vaccine in ten months that we were told would usually take up to 10 years. Their hard work, creativity and perseverance working alongside the great team at AstraZenea, has given the whole world the security it needs against this deadly virus – at cost price. With further improvements in technology and more funding going into scientific research, British science has fast become a cornerstone of our economy and society.

It’s an incredibly exciting time to be working in the field of medical research. Everyone knows about vaccine development, of course. But in the UK we’ve also seen incredible scientific discoveries of drugs and antivirals for Covid-19. British scientists in the Oxford-led DISCOVERY trial found that Dexamethasone was clinically proven to save lives against Covid-19. Dexamethasone has now been estimated to save well over a million lives across the world. We’ve also seen more recently how the Antivirals taskforce, set up just in April this year, is making great progress in securing antivirals to protect people after they catch Covid.

As we grapple with this pandemic, with new variants as they emerge, it is the medical science that will help us through – as it has done so often in the past.

This is the main reason why I’m writing this piece. I hope that the brilliance of British scientists throughout the pandemic will encourage the next generation to enter into medicine. Working in medicine brings such benefits to society, but also to yourself. In very few jobs can one say that they experience both the best times and worst times in peoples’ lives. From births to deaths, those in the NHS are there for us when we need them most. Speaking to NHS workers, the principle they all have in common is the sense of reward for helping others.

When the public were told to stay at home to save lives, they did so because they wanted to protect our precious NHS. At the same time, NHS workers and at one stage, over 35,000 medical students stepped up in the face of adversity to help look after others in their time of need. I was delighted when Her Majesty The Queen awarded the NHS the George Cross to reflect just how important their contribution was to the UK’s collective fight against Covid-19. The George Cross is awarded for “for acts of the greatest heroism or for most conspicuous courage in circumstance of extreme danger”. I can’t think of anyone more deserving of this award in peacetime.

But working in medicine is not only about public service. Our caring professions have never been more highly thought of. While the rest of the public sector saw a pay freeze in the face of the pandemic, that was not extended to the NHS. More excitingly, medicine is at the cusp of groundbreaking changes unlocked by the insights of modern data. From genomics to the use of wearables, data is transforming how we care for people as much as it has transformed so many other areas of our lives in the past decade or more.

So, if you are debating your career progression and want a rewarding opportunity that will give your life variety and fulfilment, I couldn’t recommend a job in science or healthcare more. You’ve got to be up for the challenges – because they are significant and tough. But the rewards are also huge: they are those of a mission-driven fulfilling life.

One of the many lessons of the successful vaccine roll-out is that when people with passion, precision and purpose come together, we can achieve great things. That’s what happened so conspicuously in the pandemic – but it’s what happens every day and every night in medicine. With British medicine and life sciences so demonstrably a global superpower, there has never been a more exciting time to go into the world of medicine.