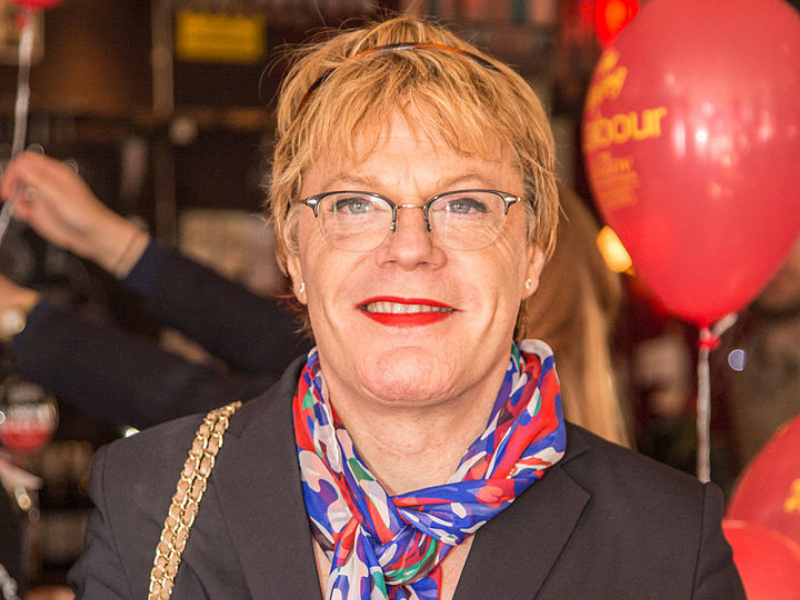 Diary: Eddie Izzard on pronouns, working with Judi Dench and the plight of the street performer

It all started when I went on Sky’s Portrait Artist of the Year. They said: “What would you like? What pronouns?” So I was there, wearing a dress and makeup and I said: “Well, she/ her.” It was a bit like: ‘Would you like a cup of tea? Coffee? Latte?” It wasn’t set up in a big way. I wasn’t there saying: “Look, it’s in the contract, you’ve got to do this.” So they decided to do that – and when it came out there was quite a firestorm. In Britain and America, in two days everything had changed. Now I’m very happy I’ve been promoted to “she”: it’s a great honour. Some people are grumpy about this but I have given 35 years notice.

None of this formed any part of Six Minutes to Midnight, which I filmed with Judi Dench and released earlier this year. That was some time before the pronoun thing kicked off. I feel it’s a tripping hurdle for us, for anyone who’s trans. People get quite militant, maybe on my behalf and I say: “Look, everyone should calm down. People call me ‘he’, people call me ‘she’. It doesn’t really matter because I am gender fluid.” What’s more important is to ask whether my comedy’s good enough? Is my drama good enough? With my marathon running, am I raising enough money? Doing things in French and German, is that inspiring enough?

Judi Dench had a sweepstake on set about whether her wobbly tooth would fall out. I did the mathematics involved, but I never gamble because I know what the odds are! Judi doesn’t do ceremony – she’s just another person, chatting with the other girls. She said we treated her well, and it was a wonderful experience.

With the whole pronouns thing, at first I thought it might change my acting career. But I’ve just done something for a Netflix show up in Manchester, and there were no problems: some people were calling me ‘he’ on set, others ‘she’. I think if I were a hunk or something like that, it would be a problem, but because I’m hopefully a more versatile, quirky actor I have to create my own area.

Going forwards, I want to do as many films as I can. I want to set up my own films, as I did with Six Minutes to Midnight, and keep giving myself a good role, as Clint Eastwood did. I’ve got to pull more stories out of me and direct them as well. But if a by-election comes up that’s a good fit for me – or, failing that, the next election if I get chosen and win it.

London has made it very hard for street performers. I came from that – and it’s the reason I can do what I do – and play the Hollywood Bowl and Madison Square Gardens and the other big places. We set up the Street Performers Association in the mid-eighties in order to fight against the rules preventing people from performing. Sadly, organisations tend to look down on street performers. I think they see us as riff-raff but street performers have been doing it for years, way back to Punch and Judy and the time of Samuel Pepys, and beyond that.

Westminster Council, in particular, is making it very tough. They did this thing where they said, ‘Let’s hear your views’. So we put forward our views and then they just ignored them all and carried on doing what they’re doing.

It’s also a question of language. Buskers tend to be musicians with a passing audience – and we’re street performers who actually get an audience, do a show and then the audience dissipates which is a slightly different thing. But really we’re all working together. If something goes slightly wrong, the council seems to be saying: “Well, everyone’s banned from playing here”. Police often end up having to marshal street performers: it’s just the wrong way of doing things.

What I find tricky with the Labour Party is when, as people who are like-minded and really on the same team, we all spend a lot of time arguing. It becomes very tiring because we keep going round the houses. Do I want to be prime minister? What I want to do is to get Keir Starmer to be prime minister, or help whoever is the leader of the Labour Party – and I am a good fighter.