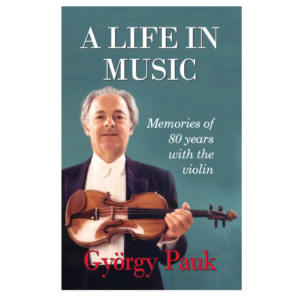 Book Review: A Life in Music by Gyorgy Pauk

I was looking forward to reading this book which charts Memories of 80 years with the violin, but publication was delayed due to the pandemic. Everyone knows that the classical music community has really suffered as many of those earning their living in the sector are self- employed and demand for their services collapsed. As for the students preparing to follow in György Pauk’s footsteps, they are anxiously wondering what the future holds for them. This book is inspirational.

Born in Budapest shortly before World War II, György Pauk suffered the loss of both his parents in the Holocaust. He spent the remaining years of the War in the care of his grandmother in the Spartan confines of Budapest Ghetto. Showing extraordinary musical talent from an early age, he began to learn the violin and was admitted to the Liszt Academy at the age of only 13.

After winning several international violin competitions, Pauk defected from Soviet-controlled Hungary, claiming asylum in Paris and becoming a ‘stateless person’ at the age of 22. He met and married his young Hungarian wife in Amsterdam. The couple moved to London on the advice of Yehudi Menuhin, gaining British citizenship in 1967.

Over the course of more than 50 years, György Pauk became an international acclaimed concert violinist, appearing worldwide with the greatest orchestras and conductors, and making countless broadcasts and recordings.

Now in his ninth decade, he is a renowned pedagogue based in London, and regarded as the foremost living ‘torch-bearer’ of the Hungarian Violin School, which traces its origins to the 19th century violinist, Josef Joachim, a close friend and collaborator of Mendelssohn, the Schumanns and Brahms.

In this absorbing account of his professional and personal life, György Pauk tells us about many of the other instrumentalists, conductors, orchestras and composers he has known and worked with.

Alongside his perpetual globe-trotting, Paul has been a devoted husband (for more than 60 years), father and grandfather, and retain friendships across the world stretching back as far as the 1940’s.

György decided that all proceeds from the sale of his book will be distributed to charities supporting young classical musicians.