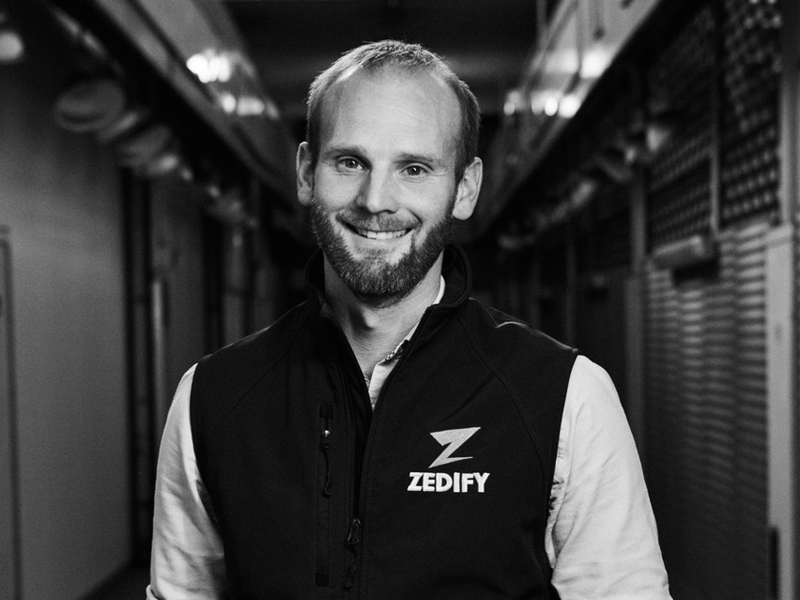 The UK Government declared a Climate Emergency in the summer of 2019. There is no single definition of what action this mandates, but MPs have pledged to reduce the country’s carbon emissions by 80% by 2050. Whilst not the ‘carbon neutral by 2030’ goal sought by campaigners such as Extinction Rebellion, it is still a sizeable task.

Rob King is making lowering emissions in UK cities his life’s work. Alongside co-founder and CCO Sam Keam, King is responsible for Zedify, a zero emissions delivery company with depots across ten UK cities. And Zedify is expanding, having opened a branch in Bristol last month.

We begin by discussing the ongoing restrictions and how they have affected businesses for better or worse. “The pandemic hasn’t really changed much in terms of keeping connected,” King says. “However, people’s expectations on needing a physical meeting have changed. I no longer have to travel all the way to Wimbledon from Cambridge for a one-hour meeting.” It’s not surprising that restrictions seem to have benefited rather than hindered Zedify: after all, delivery services are booming and expected to continue to rise.

The story of Zedify’s origins goes back about sixteen years when King was looking to set up a business with his brother. While hitchhiking in the Lake District, King got a lift with a man who was doing cycling courier work in York. The encounter planted a seed. “It seemed like a fun, outdoorsy job,” he recalls. “At the time, I was doing expeditions all over the world, and my brother was in the army getting fed up with being sent to Iraq. We always wanted to go into business together, so we thought this would be fun.”

The brothers first spoke about doing cycling couriers for small items, such as moving flowers and material from printers, but soon moved into bigger items that could be taken by cargo bikes. “There were almost no cargo bikes in the world when we started,” King continues. “We found a mad, wacky designer who had designed Chris Boardman’s bike when he won the Olympics.” The brothers grew the business around Cambridge and then three years ago King spoke to his financial adviser: he sensed that Zedify’s time for expansion had arrived. “The urban landscape was changing, people were talking about emissions a lot more, and about reducing car and van use,” he says.

By creating a licensed network, Zedify expanded into other cities, including London, and were able to access deliveries coming from outside the cities, as well as deliveries contained within the city. “We knew that cargo bikes were the most efficient vehicle for use in cities, but our competitors don’t use them because they are coming from depots 50 or 100 miles away. They have to use a van, which is good for going up and down the M1 but not for going about the city.” By using cargo bikes, King explains, “we want to make our cities better, to reduce congestion, reduce emissions. That’s how we sell our services: better deliveries and better cities.”

Included in this better service, are narrower time windows for clients and ethical treatment of Zedify’s staff, now numbering around 150 people. “Even now, 95 per cent of our industry competitors are engaged in the gig economy with self-employed drivers,” King tells me. “Instead, we decided to hire living wage-employed drivers. If something goes wrong, they’re protected and will still get paid.”

Although there has been huge interest from larger corporations that have recently been pressured into making their own climate targets, King remains skeptical of their motives and keen to keep Zedify true to its mission of providing an exceptional as well as ethical service. He admits that the environmental angle is a great selling point but that “the price and service must be right, otherwise companies will use us once and it won’t last or they will use us in one of their cities but not all. They will use us as a bit of greenwashing. We want to make sure we offer such a good service for such a good price that anyone would take us up. That’s when we will have the biggest impact on our cities, on our environment and make them better.”

As well as private work, Zedify conducts work for local councils. Waltham Forest Council supported the set-up of Zedify’s operation in London during the ‘Mini Holland’ scheme funded by the Mayor’s office a few years ago. The aim was to recreate London streets in a Dutch style, a harbinger of the current Low Traffic Neighbourhoods. “Initially local businesses were up in arms questioning how they would get their deliveries in and out. So the council put out a tender for a cargo bike delivery scheme.”

With that success under their belts Zedify now encourages other councils to review their work tenders, asking them to consider whether a van is truly needed for delivery work, to at least give firms like Zedify the opportunity to bid for the work.

On the controversial Low Traffic Neighbourhoods, King is optimistic: “We’ve got a really good case study here. People want clean air, clean streets but need to balance that with being able to get around and make deliveries. Because of Low Traffic Neighborhoods deliveries in vans are taking too long, so companies are starting trials with us. Businesses are adept at change. They can utilise our schemes or go in-house and use low emission vehicles or their own cargo bikes that are more suitable to liveable cities.”

King explains how city schemes that challenge businesses can work out for the better. “We use our depots as consolidation hubs. This means that we can do deliveries with our cargo bikes completing several routes in a day. Whereas a van would normally only do one route in a day. We can actually do two to three times the volume of work.” For example, Zedify works with a veg box supplier in Cambridge, which used to drive into town with their old diesel van to make around ten deliveries. They now drop the produce at Zedify’s depot on the outskirts of town and then the last mile of transport is done on cargo bikes. “That’s a great service for a company like that which wants to focus on other things rather than driving.”

Zedify has won significant recognition for its work, and came runner-up for the ‘Clean Air in Cities Award’ from the prestigious Ashden Foundation the year before last. King has no thoughts of slowing down anytime soon: “We’re still small but there is definitely potential for changing the whole way deliveries are made.”