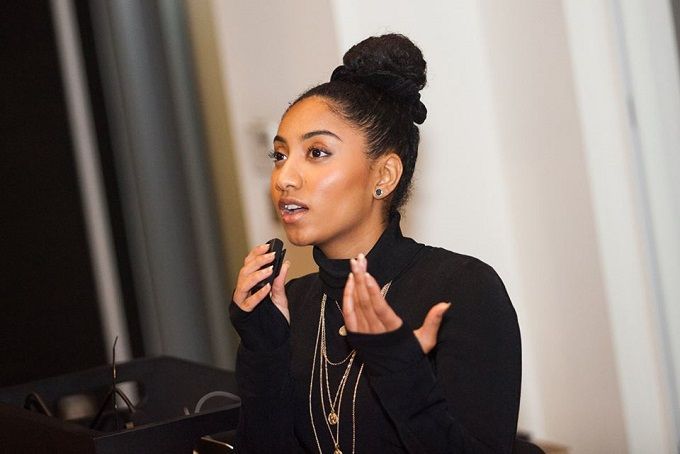 Sophia Thakur spoke alongside the sound of a harp on stage at The Ned hotel. In melodious tones she recited memories of dead friends who sleep with soil in their mouths now. She rhymed about the injustice of how black history is taught on the curriculum.  She talked about self-love too.

As the 25-year-old poet performed, she made expressive hand gestures and looked graceful in a Cinderella-style blue tulle dress. Her look was almost ethereal, until you clocked her shoes: Bright pink crocs.

Thakur’s outfit that evening captures her poetic style well. She is elegant and polished but undeniably practical and unpretentious.

“I’m on the right side of history with these,” she joked to me backstage, pointing at her shoes. “Already on stage you’ve got the nerves and if you’re wearing heels, you can fall. It’s just not worth it for vanity’s sake. About six people can see my feet so I’m completely fine to wear Crocs,” she said.

Indeed, her poetry is unpretentious. She relies on YouTube as a medium for self-expression and doesn’t think much of those who think being a poet means being a middle class man stuck in a rigid form – or the 18th century for that matter.

“You have your purists who believe poetry is this one thing and has to look like this which is fine and fair – and look, I’m not angry with them for it,” she says. “I think there’s a spectrum and for me it’s so important to identify poetry as just the simple act of communicating.”

In Thakur’s case, this act of communicating has been startlingly successful. Thakur has not only graced the stage at Glastonbury but delivered Ted Talks and appeared regularly on mainstream television. Her debut book Somebody Give This Heart a Pen became a global bestseller before it was even released and on the back of her success she has also worked with creative teams at numerous corporates including Nike, Samsung and MTV.

​So did she enjoy her education? Thakur says she did enjoy studying poetry in school but felt the “academic” approach wasn’t necessarily the best way to explore poetry.

“I fell in love with poetry via spoken word. I think in school we took quite an academic approach to something that’s meant to be so emotive and like feeling charged. I didn’t get an avenue to love it, I just got an avenue to learn it in school,” she tells me.

After school Thakur pursued an academic path and did a degree in politics. She’s still very much engaged in political discussions now, particularly when it comes to the national curriculum.

Indeed, her new comic-strip style children’s book Superheroes: Inspiring Stories of Secret Strength, was recently published by Stormzy’s imprint Merky Books. It is a response to the fact she only saw black people in history textbooks “in chains”.

In her poetry she tries to change the narrative that is taught in schools about black lives and Britain’s past. “If the only time we hear about blackness in school and anything black at all is when we’re thinking about slavery or when we’re thinking about liberation, then the only stories we have are Nelson Mandela’s or Rosa Parks’s or whoever else,” she explains, seeming to tail off.

Then she continues: ”We then grow up in a world that perpetuates that narrative where the headlines related to black people are quite negative… It’s just really, really upsetting and I think a lot of these ideologies and ideas do stem from the first seed that is planted in us which is black is weak and lesser and white was dominant and is dominant.”

On people who criticise using modern mediums such as Instagram and YouTube as a way of sharing her poetry and having these kinds of conversations, she says: “It’s really embarrassing because I think art if anything is the truth of the time and the truth of the time is this. This is how we communicate now, this is what poetry is now… oh and TS Elliot would’ve loved Instagram poetry.” And with that, Thakur heads off, Crocs and all, into what I’m sure will be a successful future.