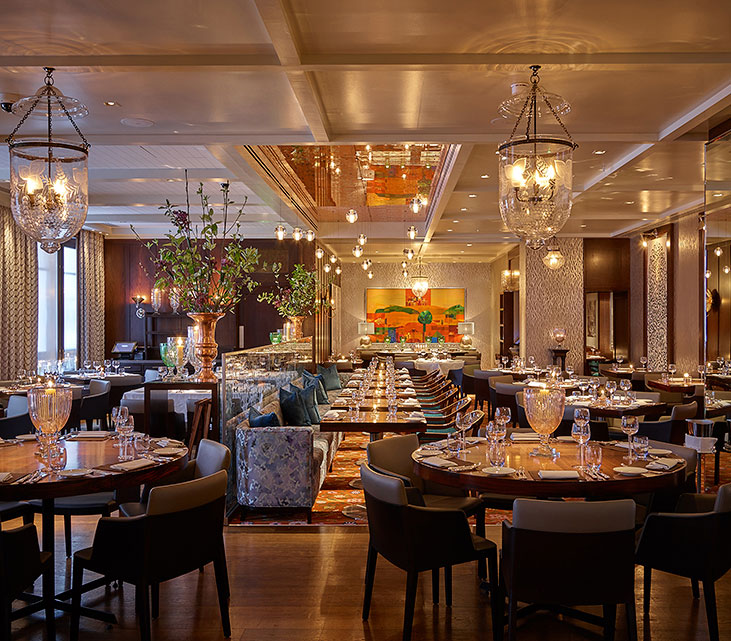 I am always punctual. Imagine my surprise when arriving at Chutney Mary in St James’s Street ahead of my reservation, to see my Parliamentarian guest already seated and drinking a Mango Lassi.

As I was led to the table, I could hear myself saying: “I did ask for a quiet table in the corner.” No matter, we were seated in the middle of a pandemic with a series of socially distanced diners. I felt that I had been here before and then realised this was the old Wheelers restaurant reincarnated. Leaving the oppressive summer heat outside, it was a quick adjustment to the refreshing cool and a dimly lit environment by which elbow greetings and pleasantries were exchanged.

The waiter arrived bearing the drinks menu. I looked at the cold beers and didn’t recognise any of the usual Kingfisher and Cobra suspects. My guest prompted me to taste one, but after a moments’ reflection, I decided to wait until I had selected my food. Sparkling mineral water was poured.

I did find the chairs particularly comfortable whilst we chatted away. After all, it had been nearly a year since we last conversed in person and there was much to catch up on. The ambience of the surroundings was peaceful, and you could hear yourself speak, something of which other notable eateries should take note. I suggested that we order. I always find that the moment you begin a deep and meaningful conversation, you immediately find yourself interrupted by attentive staff, to make gastronomic choices.

To get some food quickly on the table, I requested a Tray of Papad, miniature Poppadom’s and Crudités to share. They arrived very promptly. It was a meal in itself, with tasty vegetables and an assortment of exquisite dipping flavours. We deliberated further about the menu. My guest selected a small plate of Afghani Chicken Tikka cooked with fennel, cardamom, mace and mint. I elected for the Crispy Naan Salad, which had a chilli oil dressing, paneer, gem lettuce, rocket, roast tomatoes, avocado and asparagus. The salad rested on the Naan which was divided into pizza slices.  It was delicious but not the easiest dish to eat with cutlery, so I used my hands and endured finely chopped items falling from my palate onto the plate.

Next up, we enjoyed Lamb Shank Nellore, Welsh lamb dum cooked for six hours to achieve a smooth and intense taste. The Royal Rajput White Chicken Curry which was spiced chicken thigh, cinnamon leaf, mathania chilli and melon seeds. I hesitated to order the Goa Green Chicken Curry with herbs, green chilli and tamarind as my guest had ordered a separate bowl of hot green chilli’s as a side dish. He was eating hot raw chilli’s!  At the same time, I was thinking about a few days ago when I cooked dinner and nearly blew my head off adding Scotch bonnet chilli’s to a dish, so you might say, I retired on this occasion from this latest experience. There were additional side orders of garlic Naan, basmati rice and Green Peas with Paneer. We had requested another vegetable side dish but chef suggested the peas would make a suitable replacement.

Back to drinks. My guest had a couple of the American pale ale craft beers, made near Enfield. I didn’t fancy the German or Cornish lager and decided to order a glass of the Chateau Beaulieu Rose, Cuvee Alexandre, Provence, France 2019. It was served extremely cold and a perfect accompaniment to the main meal. I couldn’t however see the pale pink wine in the colourful surroundings.

The dessert menus arrived. Persian Kulfi with saffron, pistachio and rose chikki was quickly consumed by my guest, leaving me to enjoy Delicious Fresh Mango with vanilla bean ice cream. I am a great fan of the other Vanilla Tonka bean ice cream, but the lattice work in the presentation of the mango really stole the show.

I never grew up eating Indian cuisine, not at home, school or university. It was only when as a young man, a client introduced me to Tamarind in Queen Street, Mayfair. There I found myself immersed in flavours and tastes. I had never experienced anything quite like it until that very moment. Every time that I have visited, it is like leaving a special place and reliving the original moment again and again, still to be able to savour extraordinary fragrant food hours later. It was magical and mesmerising.

It is a tough benchmark to measure by and yet I can never not think back to that first meal and remember where I was, who I was with, and what I was eating.

And so it is. Just because you might be a Saab driver, doesn’t mean that you won’t drive another vehicle or allow yourself to be a back seat passenger in another car. It won’t stop you thinking about what you like about sports mode, turbo thrust and safety.

It is the same with a favourite restaurant. Sometimes you have to venture outside somewhere different. Chutney Mary was a completely different and enjoyable experience. Outstanding food beautifully served to boot. I just cannot be sure that my feet won’t try to walk me elsewhere.