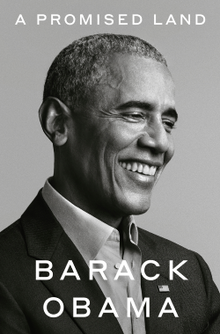 With the arrival around a year of ago of Joe Biden in the White House, there have now been 46 people who have risen to become President of the United States during America’s 250 year history. It’s only rarely that someone with the sensibility of a writer assumes the highest office in the land.

It’s easy to see why this might be so. On the face of it, the pressure and flux of the job would appear to argue against anyone with a penchant for the sedentary life taking it on. Barack Obama did. It is one of the central facts of his life that he felt the need to. That means that in The Promised Land, the 768-page memoir we have a unique document, which has much to teach us about politics – and about Biden’s America.

But the value of the memoir is still greater than that. In reality, things happen so quickly in the Oval Office, and with such drama, that we find in the pages of Obama’s book a condensed primer on human nature; it is a book so good it has much to teach us all.

The former president’s eye for detail means that the reader is given a unique sense of the White House as a working environment. Here, for instance, is the man charged with a thousand problems, taking time to notice the gardeners at 1600 Pennsylvania Avenue:

They were men of few words; even with one another they made their points with a gesture or a nod, each of them focused on his individual task but all of them moving with synchronised grace.

So the man of many words notes straightaway the men of few. This is a book about many kinds of work – it is about the job of being president – and therefore being a leader, and it is also about preserving the dignity of work for as many Americans as possible in the face of the 2008 financial crisis. But every word reminds of you of his writer’s vocation: in bearing witness to his experience, he hopes to redeem his presidency of its faults, and to comprehend – even compensate for – his errors.

It might be that he has less to redeem, in the wake of Biden’s win, than if we were now inhabiting the first months of Donald Trump’s second term. Biden is a different kind of president to Obama, but he campaigned on the back of Obama nostalgia, and at the policy level, though he is sometimes tugged to the left of the 44th president, Biden is pledged to a kind of Obama-ism.

But what American president doesn’t have regrets, if only because it is a position of such power that any ugliness in the planet is sometimes held to be their fault. And so this is a redemptive book, even if Obama can hardly think of anything he could have done differently.

But Obama, to risk stating the obvious, is more than a writer. In The Promised Land, even as he is observing with the writer half of his brain, we watch him operating in the real world. It is a rare skill. What can we learn from it?

Obama’s book begins with a potted description of his early life, and it’s distinct from the sweep of his early masterpiece Dreams from My Father. It is always interesting to read of the early lives of presidents, or figures who we know shall prove historic, since we can see how in retrospect so much of what happened was to their advantage.

Interestingly, Obama’s story is also marked by a strong counter-intuitive streak. At one point, having described his ascent to be the first black editor of the Harvard Law Review (‘enthusiasm makes up for a whole host of deficiencies’), we discover his contrarian spirit, which may be more marked in a man who has become famous as a consensus politician than we might realise:

Job offers arrived from around the country, and it was assumed that my path was now charted, just as it had been for my predecessors at the Law Review: I’d clerk for a Supreme Court justice, work for a top law firm or the Office of the United States Attorney…It was heady stuff. The only person who questioned this smooth path of ascent seemed to be me.

It’s a fascinating career progression: as the world now knows, there was a brief accommodation with corporate America when he trained at Sidley Austin a big Chicago law firm where he met Michelle Robinson. While working as a civil rights attorney, he saw an opening in local politics and rose through the state legislature – via a book deal – to Congress and then the presidency.

What comes across is that it’s not enough to know what you want to do – you have to be on the lookout for opportunity, to react to the contingencies of the world. With Obama, we can see that he retained throughout crucial flexibility; that the urge to grow was correctly traversed alongside a need to navigate the world. Obama sought experience, but never tied himself to it, and always allowed life to teach him what to do.

What is remarkable about Obama’s rise to the presidency is how frictionless it seems – how, once he had chosen politics, and made that ground secure, he was able to move upwards with very little acting against his ascent. The reader who knows about Obama’s story might wince at one point, when he writes of his wedding to Michelle on October 3rd, 1992: ‘The service was officiated by the church’s pastor, Reverent Jeremiah A. Wright Jr.’ That association would not turn out well for Obama, when on March 13th 2008, Obama woke to find videos of Wright’s inflammatory rhetoric playing on repeat across the live media. Some choice excerpts included him calling America, ‘the USA of KKK’, and his saying, ‘Not God bless America. God damn America.’

It was the only moment when, the reader feels, Obama might really have lost the 2008 election; it was possible that with poor handling, he might either have found himself defeated by Hillary Clinton to the Democratic nomination, or perhaps that he might have held on but found the Reverent Wright’s remarks a millstone around his neck in the subsequent general election battle against John McCain. ‘It felt as if a torpedo had blown through our hull.’

Obama did two things from there which are worth noting. In the first place, he shouldered responsibility: ‘I may not have been in church for any of the sermons in question or heard Reverend Wright use such explosive language. But I knew all too well the occasional spasms of anger within the Black community – my community – that Reverend Wright was channelling.’ It might be too simplistic to state that Obama strikes one as an honest person – and in fact, his time in office was marked by an almost total absence of scandal. But perhaps more important was his realisation of the importance of the moment: ‘Anyway it was too late. And while there are moments in politics, as in life, when avoidance, if not retreat, is the better part of valour, there are other times when the only option is to steel yourself and go for broke.’

But all this was heading, as we know towards the presidency, and of course the book pivots there, just as his life altered. Obama is soon in receipt of his daily briefing and problems rush his way, anxious to be solved: there is the fact of the global economy crashing; the healthcare system he has promised to fix; the immigration system which needs absolute overhaul – and perhaps above all, a climate which needed fixing. Obama took a number of decisions. The first was to prioritise the economy; the second was to pursue sweeping healthcare legislation.

The book is remarkable for the detailed but enjoyable way in which he describes each of these problems. Soon a pattern emerges. We repeatedly find Obama making sure he makes some progress (Obamacare, the size of the rescue package following the 2007-8 financial crisis), sometimes irritating those would desire bigger or more progressive legislation.

His time in the White House shows a classic case of a toxic work environment and how we react to toxicity in our midst. The Republicans refused to work with him throughout his two terms, but Obama rose above it rarely stooping to their level. This approach was encapsulated by Michelle Obama’s dictum: ‘When they go low, we go high.’

It is an excellent book, but we shall find out if it’s a great one when the next volume is published. That’s because in that volume he will have to write the words he never wanted nor expected to write: Enter Donald Trump…