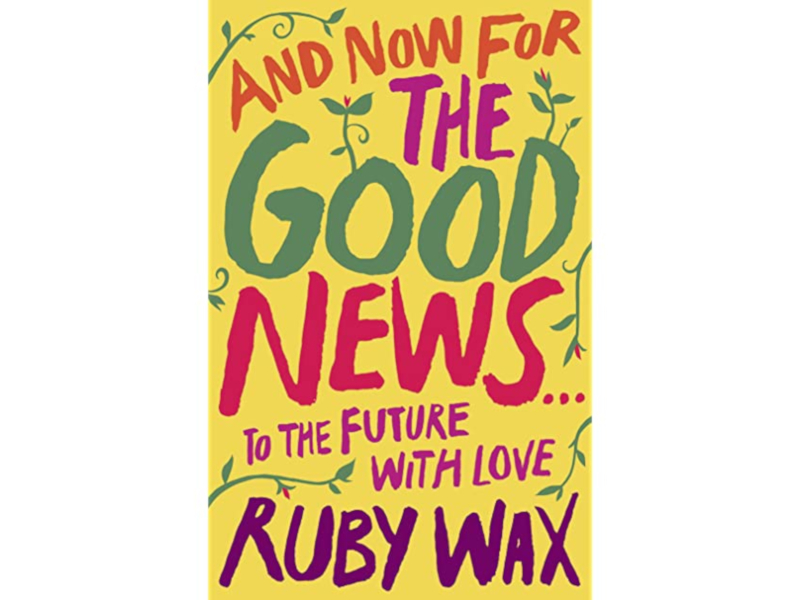 Review: And Now for the Good News by Ruby Wax

Comedian Ruby Wax gives a new meaning to the saying that bad news travels fast while good news takes the scenic route in her rambling look at the positive side of life. In her typically sardonic tone, Wax bemoans the depressing state of business, technology and the media but at the end of each chapter she reassures her readers that good news still exists. “ I had to really hunt for positive sound bites even though they should be on the front cover of every newspaper every day of the week to replace the usual photo of a beautiful woman who is either at her film premiere or dead,” she says. While her bluntness means she can talk about the bad news very convincingly, sometimes I was left wishing she would take a quicker route to the good news.

Her chapter on business takes a while to get to the good news as the first few pages contain generalisations and personal anecdotes despite the fact she begins by saying, “I’ve never understood business”. Although her takes are comically hyperbolic, they would be better if propped up with specific examples.

She states “Corporations run the politicians, who obey their beck and call. If an oil company wants more oil, the government will declare a war to get more,” without referencing any real world events, for instance. The good news, when it eventually arrives, is uplifting and she focusses on the outdoor clothing brand, Patagonia. For this she describes a meeting she had with the co-founder Vincent Stanley but doesn’t include any quotes from him.

Throughout the book, there is a frustrating lack of evidence. Due to a lack of specific examples, Wax relies on cliches. When talking about social media she says, “Let’s all agree that the happier people look on Instagram photos, the more miserable they probably are inside.”

Or, when talking about the lack of actual human connection that blights twenty first century living, she relies on anecdotal evidence: “In the old days, if you needed a plumber, a babysitter or a shoulder to cry on, there was usually someone in your building who had those skills or at least could advise someone they knew to help. Now, we have to call agencies to get someone over and then pay through the nose for their services.” Each chapter contains a ‘My Story’ section but really there need not be discreet sections as the autobiographical style dominates throughout the book.

And now for the good news: Wax is as funny in print as she is in real life and her final chapter on positive initiatives lifts the book. Wax herself set up the frazzled cafe, which provides a talking place where people who are feeling frazzled can meet (on zoom) to share their feelings.

Her references to initiatives such as Samos refugee camp and The Kindness Offensive are particularly insightful. While the book is unfortunately timed, “I don’t mention Covid-19 and that’s because I finished this book around the time it broke; so mea culpa,” she laments, the book concludes with a positive message about our times: “Look how quickly we can transform ourselves, almost overnight,” “compassion also spreads like a virus,” she soothes.