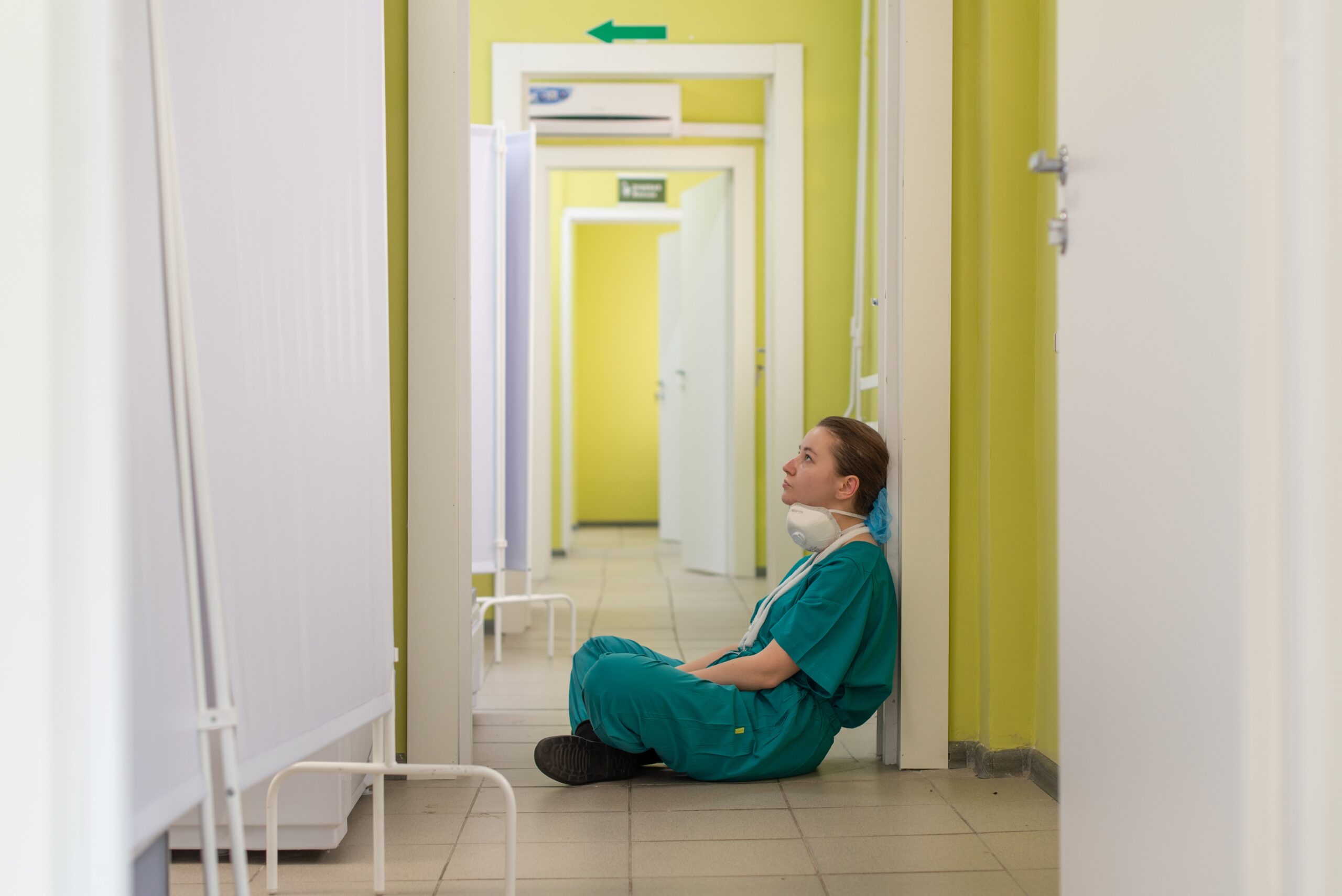 Izzy Howes, a 23-year-old NHS nurse from London, had been working in a children’s intensive care unit for just six months when she was redeployed to a Covid ward to help tackle the mounting crisis last March. The physical and mental toll it has taken is hard to put into words, but Howes speaks openly and eloquently about the struggles of that turbulent period. Her story is testament to a darker side of the pandemic which few of us experienced, or will ever experience.

“In my training I’d never looked after adults”, says Howes. “So it was difficult from the get-go. It’s a lot more physically demanding in an adult ward, so most of the time I was just completely exhausted.

“I remember my first shift I was told I’d have a ‘buddy’ nurse with me, but when I arrived they were really understaffed and I was handed a patient straightaway.” Howes says that getting used to wearing PPE for hours on end was hard, but on that first day she was “grateful” for it. “I was just crying the whole time. I had a lump in my throat – the kind you get when you are completely terrified. I kept thinking: I don’t know what I’m doing. I don’t know what I’m doing.”

Two weeks into the first lockdown, one of the surgical theatres was converted into an intensive care unit and Howes was one of four nurses tasked with taking care of 20 patients on life-support. “I remember a senior nurse looking at me and saying: forget everything you’ve learnt about nursing. Just keep them alive.

“It was complete madness,” says Howes. “I remember one shift when they’d run out of gowns but had just enough masks for us to take one break, which meant we couldn’t drink anything or go to the loo for six hours at a time. If you went on a break you were considered as wasting PPE.” Howes recalls one horrifying experience when a senior nurse collapsed on duty: “She was taken to A&E for acute kidney failure because she was so severely dehydrated. Nobody was looking after themselves”.

Did it get easier with time? “Once people started to accept that they weren’t going to achieve the level of nursing that they were used to, it did get easier; we were constantly telling each other that we could only do what we could do,” says Howes. “But even that was hard to stomach. I kept thinking: what if doing my best costs someone’s life? That bit I really struggled with. Every person is someone’s everything”.

In those first few grueling months, Howes says everyone was “running on pure adrenaline” and had no time to process the suffering they were faced with day-to-day.

And in October, when cases started piling up once again, things got harder. Howes volunteered to return to the Covid unit where the numbers were spiralling “out of control”, and her hospital became one of the biggest intensive care units in London, with usual capacity of 70 stretched to almost 200 patients. “It was organised chaos,” she says.

Howes was better versed in the practicalities of the job this time round. But as the adrenaline wore off she had more time to reflect, and with reflection came the psychological burden of witnessing the daily reality of senseless death. “I’d just look at these patients and absorb the fact that they were dying. I can remember specific patients’ faces and the fear in their eyes when they deteriorated.”

One of the most “gut-wrenching” parts of the job was speaking to families on the phone every day; “having to tell them that their brother, uncle, father is dying, but that they can’t see them.” Howes suffered immense guilt about her inability to give them “the patience” they deserved. “You’re so overworked and overwhelmed that you don’t have the capacity to virtually hold their hand. Grief does horrible things to your heart and soul, but there were times when family members were abusive over the phone. That was really hard to deal with.”

A month ago, having reached her own emotional capacity, Howes suffered a nervous breakdown and was given six weeks’ stress leave. “I was supposed to be going to a nightshift, but in my car I just couldn’t move,” Howes recalls. “I was so low, and absolutely exhausted.”

Challenges aside, have there been positives to such an intense experience? “The friendships that came out of it were incredible. We all had so much admiration for each other and it was beautiful to see so many amazing strangers coming together to support one another,” says Howes. “And it’s made me value things I didn’t before; it’s given me a huge appreciation for life. Now I’m not afraid to tell people that I love them every day.”

On a practical level, Howes harnessed valuable skills that she’ll carry with her throughout her career: “I learned that I was so much stronger than I realised. I learned to communicate with strangers, build trust and work in a team”. Covid also gave her the opportunity to care for adults, something she wants to use “later on” in her life. And despite what she’s been through, Howes says medicine is an area she’d like to stay working in: “Being in those critical life or death moments is almost addictive. How can I compare that to an ordinary job?” she says.

When you exist on the periphery of the Covid crisis, as most of us have done, it’s easy to underestimate the psychological toll which the past year has taken on thousands of nurses across the country. Howes’ journey is an important reminder that the traumatic events of the past year will not be forgotten in the minds of those lost in the thick of it.

It’s also a stark reminder than Johnson’s 1% pay rise, which has provoked huge backlash across the political spectrum, has struck a harsh chord with nurses like Howes. “My anger towards the government’s handling of this crisis was building for a while,” she says. The “hero-complex” which was superimposed onto nurses, and government initiatives such as the  ‘January pay incentive’– where nurses were offered bonuses for working extra shifts – felt either superficial or counterproductive: “It was like leaving breadcrumbs out for nurses to completely overwork themselves. If they paid us properly, we wouldn’t have to do these extra shifts and the burnout would be less,” says Howes.

So when the meagre pay rise was announced, Howes was “insulted, hurt and angry”, but not surprised: “What I’ve learnt from this year is that marginalised people will just keep being marginalised. I hoped that would have changed, but it doesn’t seem to have done.”