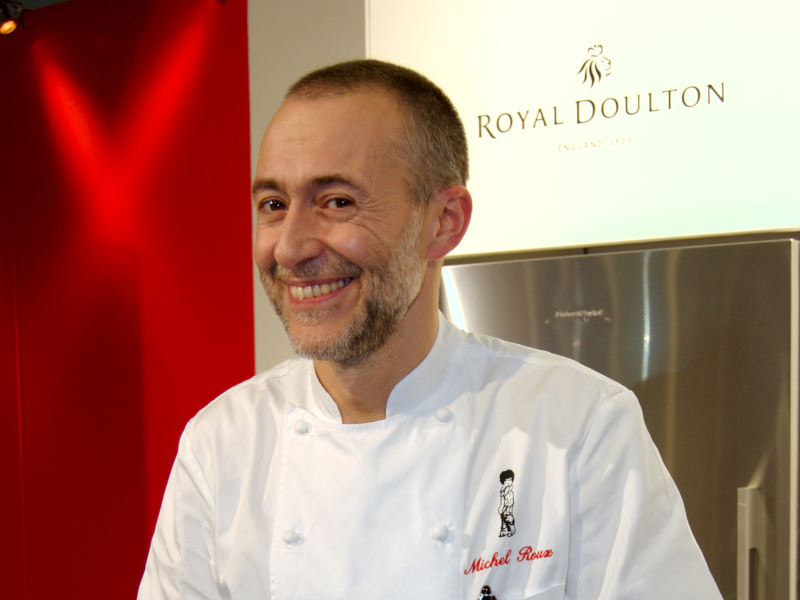 Michel Roux Jr: ‘Le Gavroche is more than the food’

As part of our regular series examining the impact of family relationships on careers, we spoke to the La Gavroche chef about keeping the family flame.

If ever you’re lucky enough to eat at Le Gavroche, your good fortune is likely to be compounded once you’ve had your food. It’s Michel Roux Jr.’s habit to do the rounds after lunch, and perform a friendly tour of the room. Roux will pose for photographs and laugh genially as the complements accrue. ‘I love being able to provide a total experience for our guests,’ he tells us. ‘I love meeting out guests, whether regulars or new.’

As a result of this tactile approach to the business, you’d think lockdown might have been difficult. Roux strikes a cheerful note. ‘I’ve been incredibly busy during lockdown, not least with the arrival of our first grandchild, which is really wonderful.’

So another Roux enters the world, no doubt stocked with the genes of a master chef. Roux has followed in the footsteps of not just one but two famous relatives. You might think that his father might have been Michel Roux Sr., who died in March of this year, but you’d be wrong: in fact, his father is Albert Roux, and Michel Jr. was named after his uncle. Le Gavroche – which opened in 1967 – was the first UK restaurant to obtain three Michelin stars, and Michel took it over in 1993. How did it feel to be following in the footsteps of famous relatives? Roux recalls: ‘Of course, it was a massive responsibility when I took over the reins at Le Gavroche, nearly 30 years ago now. But if my father hadn’t thought I was ready, he wouldn’t have handed them to me. There is no question I feel a commitment to maintaining the Roux flame, whether in the restaurants or through our Roux Scholarship competition.’

One often feels for the children of famous parents: it must be hard to achieve anything in your own right. Martin Amis frequently complains about the Kingsley comparisons, and Euan Blair cannot discuss his own original (and unBlairite) views on education without having ‘education, education, education’ returned to him.

So did it take a while for Michel Jr. to arrive at his own identity as a chef? Roux explains that he’s moved with the times: ‘Over the years, the food at Le Gavroche has evolved to embrace the requirements of modern diners, so a meal at Le Gavroche will be a lighter one than when the restaurant first opened, but the essence of French classicism is very much there.’

It’s a good point: we might sometimes strive to differentiate ourselves from our parents’ achievements in the workplace, but usually time will do that for us anyway, and ensure that we inhabit a different moment in history. One example where that’s proven the case with Michel Jr. is in his highly visible TV career.

So how does he think shooting will be in the post-lockdown era? ‘I was lucky to be involved in the production of ‘Hitched at Home, Our wedding in Lockdown’ for Channel 4, which was definitely TV for lockdown. It was very different to the usual filming set-up.’ How so? ‘It’s going to be incredibly difficult to make the same sorts of shows as before, even with one meter social distancing.’ But Roux adds that he’s ‘seen a lot of creativity: talking heads, and getting family members to film over longer periods using professional equipment at home.’

Interestingly, the Roux tradition is already being continued in the next generation. Emily Roux and her husband Diego Ferrari have their own restaurant Caractère in Notting Hill. So what would Roux say to young people mulling a hospitality career? ‘Front of house and in the kitchen, hospitality can offer an amazing career. You’re always learning, you have the opportunity to experiment and be creative, and it’s incredibly satisfying to provide good service. But it is hard work, and you need to put in the time to learn the craft.’

And how has lockdown been for Le Gavroche? ‘The most important thing for me is to make sure our staff are doing as well as they can. It was frustrating waiting for the government to come up with their guidelines for the hospitality industry.’

Roux chose not to home deliver (‘Le Gavroche is more than the food’) and instead kept in touch with regulars through newsletters ‘to keep everyone engaged.’

Despite his obvious love of his work, the question persists. One can’t help but wonder whether the family name hampers people like Roux, and whether some other career might have been possible had there not been the need to keep it in the family.

But Roux doesn’t feel this way. ‘I never considered anything else. Food is in my DNA, and I love working in the industry.’ Parfait and bon appetite.