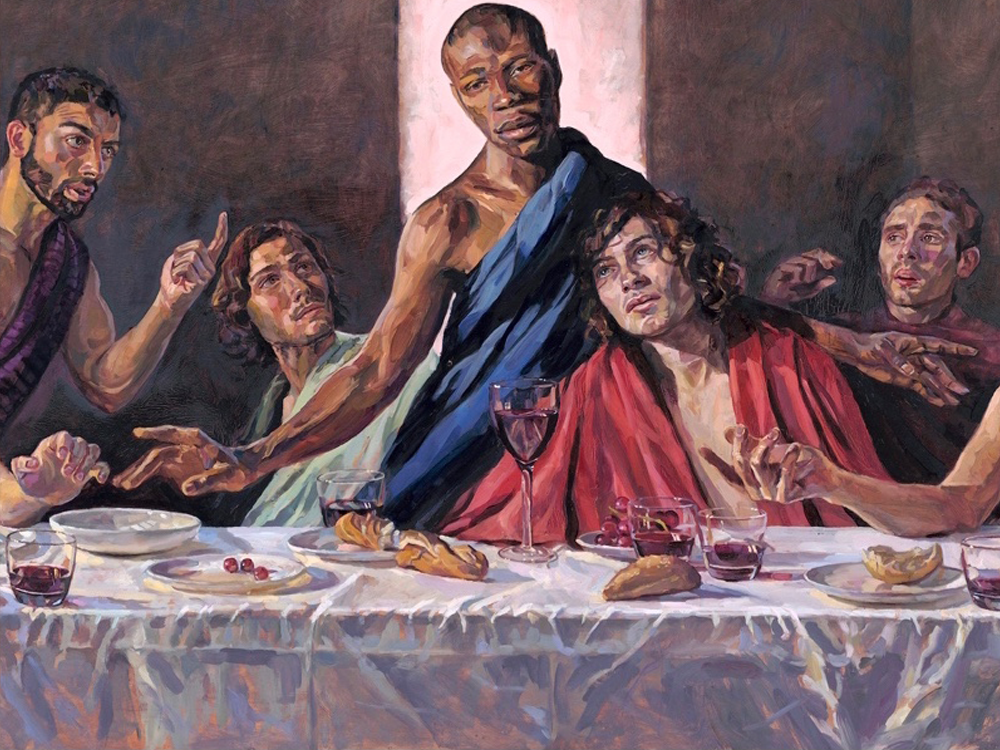 Lorna May Wadsworth: the art world has become ‘glib and ironic’

One of the more positive aspects of the last pandemic year has been a marked reshuffling and redefining of different work sectors. For the art world this has taken the shape of a shift towards digitalisation and experimentation with different art forms: one thinks of livestreaming plays and virtual exhibitions. For the most part, the arts have undergone serious damage since the forced closure of venues and live events. Artists across the world have had to readjust in what was already a financially volatile sector.

But for Lorna May Wadsworth, a renowned British artist who has done portraits of Margaret Thatcher, former Archbishop of Canterbury Rowan Williams and writer Neil Gaiman, the pandemic brought with it considerable success. But it was a success built on firm foundations. All of those pictures had already been exhibited in her 2019-20 Gaze Retrospective exhibition at Sheffield’s Graves Gallery alongside 100 other of her major portraits.

Wadsworth’s painting ‘A Last Supper’, an important reworking of Leonardo Da Vinci’s great fresco, brilliantly captures the diversity of modern culture. It was first painted in 2008-2009 but rose to fame in 2020, as the Black Lives Matter protests took the world by storm.

In a recent live Instagram conversation with Isabelle Kent (@izzy_kent) from the Colnaghi Foundation, a not-for-profit platform which promotes Old Masters and Antiquities to a 21st Century audience, Wadsworth spoke of how the painting’s revival was one of the many “strange surprises” of lockdown.

Over a decade ago, Wadsworth was approached by a church in the Cotswolds which wanted to commission a reworking of the great masterpiece. “I said I’d do it on the condition that Jesus be a black model and the disciples beautiful young men,” Wadsworth said. She had just painted her portrait of Thatcher, and wanted a “challenge” after her 2007 debut solo show in London, Beautiful Boys, which consisted of individual portraits of handsome young men painted from life in her studio, who she scouted out and about in London.

Despite the painting’s technical virtuosity and bold subject matter, Wadsworth said that when she first unveiled it at St Martin-in-the-Fields she couldn’t get the double exhibition A Last Supper/Sacred Or Profane included in the Time Out listings. It was only when a 9 foot print of the painting was installed in St Albans Cathedral in solidarity with the Black Lives Matter movement that it was noticed. And noticed is an understatement: Wadsworth’s piece was soon plastered across newspapers around the world even prompting questions surrounding a mysterious bullet hole in the aluminum panels behind the painting in Christ’s right side.

The strange, even spiritual, journey of Wadsworth’s masterpiece reminds us that there is no one linear path to success, and that recognition can come at unexpected times and in unexpected ways; an artist’s work can be revalued years after its composition.

Perhaps this is a silver lining artists can take from the pandemic: despite the difficulty of the artistic life, when artists can sometimes feel they are toiling to little appreciation, the moment for recognition can arrive suddenly. Success is neither finite nor time-bound.

State of the arts

The arts sector has, in recent times, been self-consciously defined by its deviation from the norm: venerated 21st century artistic giants, such as Tracy Emin or Damien Hirst, have made their mark through a distinctively unconventional approach to the practice and concept of ‘art’.

For Wadsworth, the commercial art world has become “glib and ironic”, and she says that satisfaction in her work comes through its impact on the community: “I love the fact that I was painting an actual altarpiece that people would live their lives around and pray to,” she says of A Last Supper.

Wadsworth’s work treads a delicate middle-ground between the modern and the traditional. She is in thrall to Old Masters such as Van Dyck, Rembrandt and Singer-Sargent, and says that after sketching them from life, visiting their work in a gallery is like “bumping into an old friend”.

But she’s also interested in challenging a tradition and canon which is predominantly male-centred: many of her works – A Last Supper included – aim to subvert the male gaze. Wadsworth is keen to stress that her conception of the ‘female’ gaze is not correspondingly voyeuristic. An observer, she says, should not be an imposition. They should feel compassion, and they should honour the subject.

“We are all a bit sick of the myth of the male genius, aren’t we?” she says. Personally, I find it hard to disagree.

To view the talk between Lorna May Wadsworth and Isabelle Kent please visit @colnaghifoundation on Instagram and click on the image on their grid of Wadsworth’s A Last Supper.

The Colnaghi Foundation are organising a series of live interviews over Instagram with artists and creatives whose work reframes art history in a modern and relevant context. Recent guests have included artists Kent Monkman, Babajide Olatunji and Nancy Cadogan, and historian Simon Schama. You can find them here: https://www.instagram.com/colnaghifoundation/?hl=en