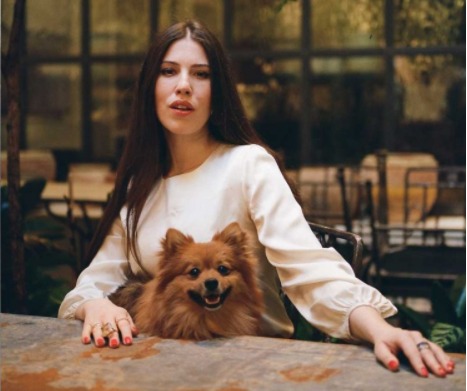 Lily Lewis:“I want to be rich, famous and thin – and if I can’t be that I want to help”

Lily Lewis is marching me off to buy a coffee with her pooch, Betty. It’s the kind of small strutting dog that looks as though it’d be most at home in a designer handbag. It suits Lily, the strikingly beautiful, effortlessly glamorous artist daughter of former Groucho Club chair and hotelier, John.  She tells me she rescued the dog from a puppy farm after its owner died during the pandemic. This seems rather typical of Lily too.

For instance, Lily used Safe Spaces, her portrait exhibition which featured mistreated Hollywood stars from the 1930s and ‘40s, as a way to raise charity funds.  “I called up Refuge and said, ‘I’m going to help you and there’s nothing you can do about it,’” she tells me in a melodious voice that sounds like cigarettes and money.  And so she did. During a private auction of the portraits attended by the likes of singer Ellie Goulding and her art dealer husband Caspar Jopling, Lily raised around £70,000 for the charity.  “I have a platform and it would be seriously remiss if I had an opening and just had a drinks party for people I already know, who come from a position of privilege,” she says dutifully.

I attended this private exhibition a few days prior to our interview where I bumped into actor Claire Forlani who had tears in her eyes while viewing the work. Lily tells me she met Claire during a holiday in Italy which was attended by the likes of director Sir Nicholas Hytner, prime minister Boris Johnson and his then wife Marina Wheeler. While everybody was being “unbelievably grown up” the pair bonded over their inappropriately fervent love of truffle.

Lily recalls with a mischievous giggle: “In the evenings we’d have a huge plate of pasta and someone would come around with white truffle and a white glove and expect us to say when. Claire and I got to about four fists of this stuff each and we’d go ‘no, no, keep going’. At the end of the weekend they basically brought a ball between us, and a spoon.”

In my day job as a Diary reporter I encounter a lot of posh, society girls, who regale me with similarly ludicrously luxurious anecdotes but there’s something different about Lily. She is intelligent and talented and I get the impression, although she is part of London’s elite, she feels like an outsider.

As is the case with most interesting people, she didn’t get on with school.“I hated it,” she shudders, “every dog has their day and I’m glad mine wasn’t when I was 16”. She recalls her parents being called into the headmaster’s office as a teacher had started a petition for her and her siblings to be removed from the school.

After school, Lily studied textiles at Central St Martins but left after a few weeks as she hated this too. “I thought it was quite pretentious and there were a lot of people who hadn’t been great artists trying to break you because they had been attempted to be broken themselves. I am not a very likeable person to people in positions of authority. I would be terrible in an undemocratic republic. I would definitely have been burned as a witch,” she cackles. Instead, she attended Kings College London where she studied English Literature and then did a masters in Psychoanalysis.

There’s a cliche that people who study psychology are spurred by an interest in their own atypical brains. Indeed, Lily fulfils the cliche that cliches are often true and tells me about her atypical brain and synaesthesia. “I can sort of see colour and I can smell sound and my senses get mixed up… If someone hits a loud noise I see colour. I am a big fan of opera and that’s one of the reasons why.” She also tells me about the breakdown she suffered in New York. She moved there with a boyfriend  and around Halloween time she told him she was popping back to the UK to pick up her stuff, she left and didn’t speak to him until February.

But she doesn’t think any of her emotional struggles have made her a better artist. “I don’t want to perpetuate the image of the artist having to be miserable because I don’t think that’s true. There’s a process of egg laying which is natural and uncomfortable. If there is a project that will end in a product I will get myself into a state where I am deeply uncomfortable in order to be able to produce it. Creative constipation is very different to struggling with mental health,” she insists.

Key to her success, she says, were her parents. Not only did they refuse to apologise for her being different, they also raised her and her three siblings in a hotel. They were all encouraged to be interested and interesting. The hotel was frequented by famous characters such as actors Tim Curry and Gary Oldman. She recalls sitting on Bond star Piers Brosnan’s lap as a little girl with him drawing pictures and telling stories.  “Everything is a story. People tend to communicate with children in stories and so I met so many people that everyone had a story for me.”

Through her career as an artist and poet, she has continued to share stories.  Perhaps it’s this heightened awareness of narratives that has contributed to her own quirky character. Often she speaks in aphorisms that make her sound like she’s playing a part in an Oscar Wilde play. Though her refusal to reveal her age seems to hold an outward looking awareness of the pressure of narratives rather than a Dorian Gray-esque vanity. “Do you have to put that in there? I don’t want to say,” she squeals when I ask her the question that all journalists have to ask. “I don’t think anyone needs to know it. I often find everyone always asks how old someone is to relativise what they have done in their life. I have never been keen on saying what age I am, it’s just so arbitrary.”

But she does think about getting older and of course, she factors in how she can continue to do good in the world. “I fully intend on training to be an art therapist because I have arthritis in my right hand and I am ambidextrous but there probably will be a time in which I am not able to paint any more or maybe not to the level I want to. I also want to help work in prisons.”

“My aim is to be rich, famous and thin and if I can’t be that I want to help,” she laughs.