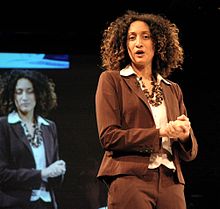 I was at Oxford University and I didn’t really know what to do with my life – I only knew I wouldn’t really fit in at McKinsey’s and places like that. I was involved in an organisation at that time which was about opening up access to Oxford and Cambridge. They would send black students at Oxford to schools with a diverse intake and say: “I’m there, and I’m doing okay.” I used to go to schools in Birmingham, Manchester and London and I could see children changing their minds in front of me. I thought: “You can really make a difference.” And I’ve never regretted my choice.

Grammar schools aren’t really the gold standard anymore. They take the best and capable kids, but they’re not necessarily the best schools. In fact, I’d argue that grammar schools don’t have to be particularly good at all – precisely because of their intake. The kids will always do well because they’re super bright. At Michaela Community, we don’t have those kids – and it’s really complex teaching your bottom sets. If you only get the top slice you don’t have to think about learning in the same kind of way. If you have a school with real diversity, you have to be doing a great many things to get those kids learning.

If a private school headmaster came to my area, they wouldn’t have a clue. That said, there are ways in which private schools can support state schools, without going in and telling them what to do. They can send some of their students over to do some tutoring of younger children, or they can offer their careers fair to the local state schools can go and join. Or they can send teachers across – these are things they can do without seeming patronising.

All universities are influenced by popular culture. And our culture now is one that’s woke –  that’s the problem. Of course, you might say, “Oh, but that isn’t the case everywhere and if you go out somewhere in middle England you can find families who are not thinking that way. Yes, possibly. But the media, the establishment, and all the people who set the tone for the country, are of that mindset. And the universities are also that mindset and perhaps even further along. So it it’s not even as if you can choose: any university you go to, that’s what you’ll come across. Unfortunately, there isn’t anything I can do about that. It’s great that there are people thinking of setting up non-woke universities like Barry Weiss in Texas – but it’s still worrying. Having said that, if our students have spent seven years with us, hopefully we’ll have done a good job of grounding them and giving them certain values.

Often, I think families think that tutors are some kind of magic pill that you take families. And you can tell the tutors come by once a week, they do a bit of teaching in an hour. And it’s something but the habits of learning are created over years on a daily basis. The problem you’ve got is if you aren’t being given the correct work to learn and if you’re not being taught properly in essence, it is hard for a family to support the home with that. I could suggest to you online maths programmes that would be far better than any maths tutor because the maths tutor can only do it once a week.