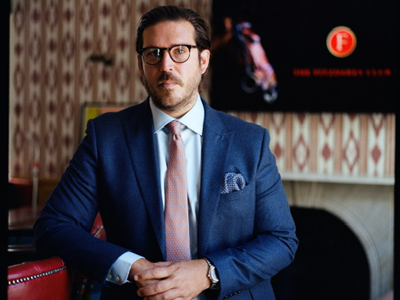 The CEO of Luxury bookmaker Fitzdares speaks to Georgia Heneage of his career journey, the need to bring the ‘human’ back into business and the secret recipe for success

Will Woodhams’ journey from Archaeology & Anthropology undergraduate to CEO of the world’s leading horseracing bookmaker Fitzdares holds nuggets of wisdom which any young jobseeker can learn from. And this is precisely the direction our conversation takes: even over the phone it’s easy to tell that he’s a natural people person – friendly, funny, and very generous with his advice.

Woodhams entered the business world with a whole lot of drive and absolutely no experience (or formal training, for that matter). “All I did was flip my skill set on its head to become a corporate beast,” he tells me.

Zigzagging from company to company, and propelled by his drive to “just get on and do stuff”, Woodhams worked for brands like French Connection (which he says he was “woefully underqualified” for), LVMH (Moët Hennessy Louis Vuitton) and finally Fitzdares. His career, he says, has taken the twists and turns of a “poacher turned gamekeeper”.

So what is Woodhams’ core advice for anxious jobseekers beginning to brave the corporate world?

Woodhams says that one of the most useful takeaways from his degree at Durham was the ability to “segment” his audience; he’s since learned to tailor his business model towards the right audience, even if that’s a high fashion brand aimed at women.

“People pigeon-hole themselves into industries,” says Woodhams, “when all you need is to understand what consumers want; which is good customer experience and to be taken seriously.”

Have a point of view and filter out the ‘bullshit’

“This is the best advice I could ever give anyone,” says Woodhams. “You can read as many business books as you want but if you’re not actually shaping a particular point of view then you’ll fail.”

For young people there’s reams of information and advice on the internet. “It’s a bit like the protestors in America,” says Woodhams. “If you’re reading it, you’ll start believing it.”

“I think that having a really strong bullshit filter is absolutely imperative,” he says. But this is something you have to learn yourself: “No one can teach you that, and if you haven’t got it then you’re not probably going to do all that well.”

Make decisions quickly, and have the ability to pivot

In a world governed by tight time deadlines and swift turnovers, the “greatest skill anyone will ever have” is making decisions quickly. “That means hearing everyone’s advice, looking at the data, and then just making a call,” says Woodhams.

But this isn’t always easy with big corporations, in which management is like “moving a supertanker”. Businesses must “be agile and be able to pivot weekly”, says Woodhams. Using another apt aquatic analogy, he says that once they stop moving they will, like sharks when they stop swimming, die.

“A good example of this is Coca-Cola. People think they are static because the brand has stayed essentially the same, but they tactically remove products or markets and are brilliantly creative. They were the first brand to do personalization, for instance. So there’s tonnes of stuff happening under the water, even if the surface looks still.”

How has Covid-19 affected this?

Our lives in the previous year have been defined by the very sense of immobility which Woodhams warns is the death of all businesses. So how can this be avoided?

Characteristically cutthroat, Woodhams says Covid-19 has in a sense been the great divider, or test, of business models. “Most businesses which have died haven’t been able to pivot quickly enough,” he says.

Woodhams’ advice comes from personal experience. Woodhams has used the pandemic to accelerate business and get his clients “excited” about their future relationship with the bookmaking company.

In September, Fitzdares faced almost certain death. But Woodhams was determined to build from the ground up, and he capitalised on the lockdown.

Despite being opened and closed “like a fire escape”, they managed to generate huge amounts of marketing publicity which has been hugely beneficial for the business as a whole. They sent daily emails to clients, organised a drive-through in Derby so that clients could watch the race on a big screen, delivered Beef Wellington and encouraged people to post on Instagram, set up a wine club and a pasta club, and are planning to hire a castle for clients as an equivalent to the Cheltenham races in March, where it’s easy to socially-distance.

“It’s about finding a solution to a problem. Business has been really good this year!” says Woodhams.

But Covid-19 aside, what is the state of the betting industry as a whole? Because of government regulations over betting, the sector has been in a “tough spot”. But Woodhams is optimistic; “it’s a massive industry in the UK and we’re global leaders in the market”.

Fitzdares has found a niche within the sector and played on the lack of care for customers shown by larger betting companies, which more often than not results in addiction, mental health issues and alcoholism. “We’re zigging when everyone’s zagging, and it’s working,” says Woodhams.

This support for his clients is at the core of Woodhams’ business ethos. As big tech hurtles to new heights, Woodhams believes customers increasingly crave the “human side” of business. “The experience economy is coming back,” he says, “and I’ve noticed that customer service has got better again.”

In Woodhams’ opinion, some companies deemed successful are hindered by a lack of attention to their customer needs: “British Airways is considered the world’s finest airline but I think they’ve shot themselves in the foot by delivering bad customer experience; it feels like they should be a cheaper product.”

Topshop, who used to have a “great customer experience” back in the days when their store in Oxford Circus was teeming with pop-up beauty bars the occasional live events is another case in point. “The experience got worse and worse, the business got worse, the product got worse and even the owner became worse.”

So if tech is “coming in and eating people’s lunches by trying to smooth the consumer journey”, what is the ideal business model in an technical age crying for the return of the human touch? A mix of the two, says Woodhams, is the “axis of amazing customer service”. With that our time is up, and I realise my conversation with him has enriched my understanding of business – and the world.