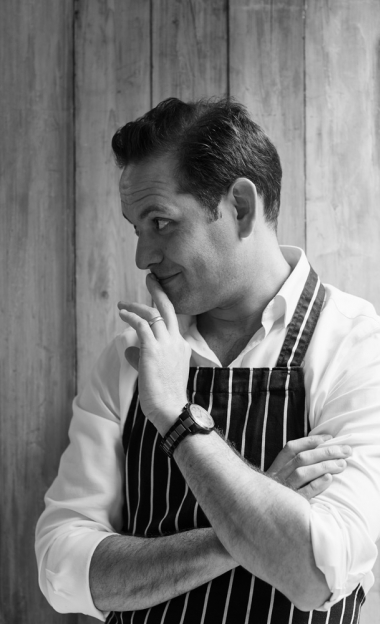 GW: How did you get your start in becoming a chef?

TW: I fell in love with cooking from a young age at school during Home Economics. I realised whatever I cooked in the class, it made people happy and I really loved that feeling – that is what a get a kick out of, seeing people enjoying great food.

Lemon sole with nut brown butter, shrimps and samphire. It reminds me of childhood holidays in North Norfolk – where I am taking my family this summer.

You have quite a C.V. including Gary Rhodes and Gordon Ramsey. Were you intimidated working for these big names and are their personalities truly reflected when we see them on T.V?

Working for some of the very best chefs in the world has been an absolutely inspiration to me – we all put on a bit of a pantomime now and again.

Being a Chef often involves unsociable and long hours which can make it unappealing to the youth. What aspects of the job drew you to the kitchen that may inspire the next Tristan Welch?

I think the hustle and bustle of the kitchen really enthused me and drew me in. There is nothing quite like the camaraderie amongst a kitchen team. Some chefs I worked with 10 years ago, when we bump into each other now, we greet each other like great friends – it is relationship-forming.

Famously the kitchen is a stressful environment where much head bashing takes place with expletives thrown at one another, most exemplified by Marco Pierre White and Gordon Ramsey. But with more workplace environments and office spaces adopting a kinder approach, reprimanding and firing those who shout at their subordinates, is this attitude beginning to change in kitchens or does its unique environment separate it from this problem?

Those days are gone. We are at a very interesting point now, that I identified 6 years ago (before we started Parker’s Tavern), the training we had and the style of training is no longer relevant to young talent today and as industry leaders, it is for us to take it seriously and find the solution to guide up and coming talent through and help them flourish in this fantastic industry.

British cuisine has come a long way in a short time, now within the top ten countries with the most Michelin stars. What do you think has changed and is progress likely to continue?

I think the country’s attitude towards food has completely changed. When I was fresh out of college (even before then), my father would drive to France three times a year to stock up ‘on the good stuff’. Even in the early days of my career, I was told I had to live and work in France to really understand food and I did, I spent time there. But nowadays you don’t need to – you don’t have to go more than 300 metres in Cambridge to get to an amazing artisan bakery – we have great food on our doorstep.

What advice would you give to a budding cook and where to start on the career path to become a chef?

Follow the food that you love, have a goal in mind and in the back of your head. Understand that there will be hard days and great days but never lose sight of your goal.

Poor nutrition and obesity appear to be a problem in the UK. Do you think that there is an educational gap in public knowledge?

Yes, I think there is a gap in nutritional knowledge. However my children are being taught about nutrition to the point they are questioning their own school dinners so the future is bright on that one…

At school in Food-Tech I made Coleslaw, Pizza and a Trifle. Hardly set me up to be a great Chef. How would you go about inspiring children to cook and take what they eat seriously?

That doesn’t sound too bad! One of the key things especially for children and young adults is don’t be afraid to experiment. One of the things I do as a parent is give my children the full run of the kitchen. They can mix and make anything – sometimes yes, it may be inedible and sometimes it is great. For me, that is the best way to inspire.

School canteen food has also been the subject for debate by some chefs, expressed most by Jamie Oliver, but how would we go about bringing a Michelin star experience to children?

I think in this question lies the problem, we don’t. Michelin star for kids is the wrong idea – it is about good, wholesome food that is nutrient rich and fresh. I know it is the toughest thing in the world to cook for children all the time but it is certainly something we need more of a focus on. Jamie Oliver did a smashing job however it seems to be slipping back a bit and at a time when we need to focus on our kids more than ever.

Often for those trying to learn the skill of cooking from scratch it can be quite daunting. Thousands of cookbooks, an infinite number of online resources and numerous cuisines. Where would you tell these beginners to start and what path to follow to becoming a professional home Chef?

During my cookalongs at 6pm every Thursday on @Parkers_Tavern on Instagram! If you aren’t joining, that is why you can’t cook!

Famously around the world many countries have a negative perception of traditional British cuisine, how do you feel about this international reputation?

Apparently we have bad teeth too!?

When discussing British Chefs in general, Pierre Koffmann had stated that “Not enough Chefs cook from the heart. There’s a lack of originality, too much copying”. What are your thoughts on this and what advice would you give to aspiring chefs to avoid this problem?

I wouldn’t worry about copying too much, it isn’t something I would advise but I agree with Pierre, cook from the heart, cook what you love. On Cooking With The Stars, we made carbonara, is that considered copying? We made from the heart, it was fantastic and fun.

Does food have to be complicated to truly be good?

No – one of the most amazing salads is just picking tomatoes off the vine and serving with olive oil and a bit of seasoning.  Complicated? I think not. Completely delicious? Yes.

After watching your performance on the Great British Menu it must be asked what you think of food critics. Are they viewed much like music and film critics who can judge but not create?

Some restaurant critics are better than others, but to be fair everyones a critic nowadays.