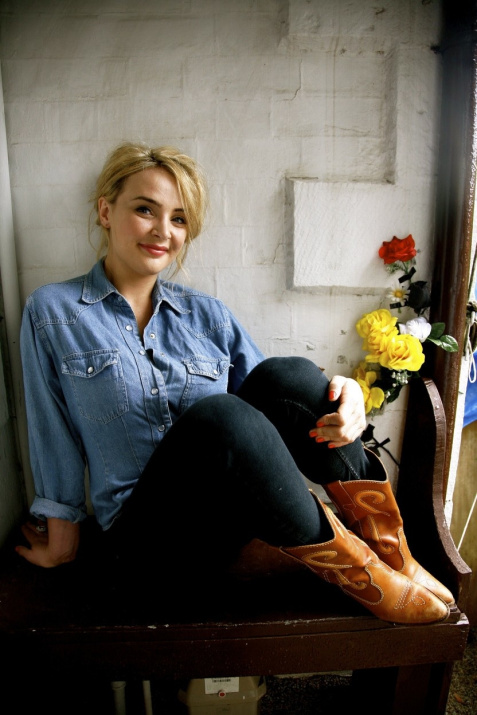 Emma Swift: ‘As a musician, you’re essentially a small business’

These past few years have taken everybody for a spin. In some ways my job’s been easier because I don’t have to try and tour and I’ve mainly done my record Blonde on the Tracks, a collection of Bob Dylan covers, online. I studied English literature at the outset, and then I became a journalist and also worked in a government department. But I quit all that and moved to Nashville, Tennessee to do music.

I was always a bookish kid and then grew up into a bookish woman. One of my songs on the new album is a cover of Bob Dylan’s ‘I Contain Multitudes’ – and I think I was responding to the references to Walt Whitman, and to Edgar Allen Poe. I can still recite ‘Annabel Lee’ – so my education gave me the foundation to what I do now.

I’m often asked about the direction of the music business. With Blonde on the Tracks I chose not to stream it at the beginning of the release, because we’re in a pandemic year. I play essentially Indie folk, and at my age in the 1960s, I would have been playing the folk clubs – and today for people like me the bulk of our income is made touring. But when touring stopped that has meant mass unemployment in my sector. So I decided to make this an online-only release.

What I would say to anybody interested in a career in the arts is just to be flexible and be open to change, because the music industry is always revolutionising itself. People will tell you that it’s all streaming now – but it’s not always going to be all streaming forever. It will pivot to something else. The music business does that constantly: 20 years ago the advice would have been that all vinyl is a total waste of time; nowadays vinyls are outselling CDs. The best thing to do as an artist is just to trust your instincts, and realise that you’re essentially a small business. There’s no right or wrong way to run your small business: there’s a multitude of ways that you can operate as a creative person.

It’s also good to be persistent as a creative person, but also good to be able to take break if you’re feeling burned out by your art – because it can be exhausting. Give yourself permission to take time off.

But perhaps the most important thing is just because you do work another job that doesn’t make you any less of an artist. TS Eliot worked in a bank. A lot of people in the music business now have to have other gigs, because that’s the best way to survive and that’s okay.

Of course, people who are creative are not very good at administration – it can be challenging and deeply boring. I find it very difficult to switch gears and it’s really hard for me to write if I’m also thinking about record distribution and invoices. But it definitely doesn’t hurt to know a little bit about all that – and anyway you’ve got to do it. I’m capable of organisation and chaos – depending on the day of the week.

The other thing with music is that you have to be so present on social media. You have to really go out there and spend an hour at least. For an artist at my level, had I not been ubiquitous on the internet, the record would have disappeared. The fact that it didn’t is likely due to the fact I spent an enormous amount of time on Twitter.

I would also advise engaging with other people’s music. If you’re not buying CDs, why would anybody else? I do have some regrets about the latest album. If I did it again I would span a broader cross section of Dylan’s work. I skipped over the 80s and the 90s, but all of these Bob Dylan songs have made me a better songwriter.

That’s not to say I’ll be doing another album called ‘More Blonde, More Tracks.’ I now realise that what I’ve done is to put myself under an enormous amount of pressure to follow up a Bob Dylan with my own songs. When I look at that now, I think: “Gosh, that’s insane. Why would anybody do that?”

Emma Swift’s latest album is Blonde on the Tracks