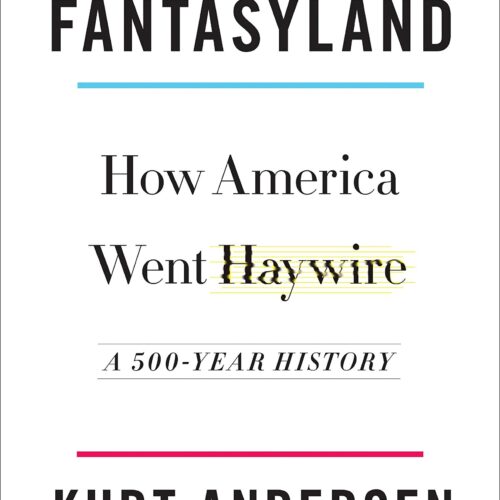 In his thought-provoking book Fantasyland: How America Went Haywire, New York Times best-selling author Kurt Andersen connects the dots from America’s Puritan past to today’s fantasyland of fake news, conspiracy theories and alternative facts that gave rise to the Trump presidency. Reading Andersen’s 500-year history crystallises the reasons why we’ve become a country with a partially developed frontal lobe, incapable of fully functional reasoning and rationality, prone to the fantastical.

While Donald Trump’s victory in the 2016 election shocked America – Andersen suggests it even took Trump by surprise – his rise in politics is proof of America’s ultimate embrace of Fantasyland. Trump’s triumph hinged on his ability to play an impresario who leveraged the fantasy-industrial complex to his advantage like no one had ever done before. He played to conspiracy theories, exploited myths of white racial victimhood, and rode a far-right extremist counterculture that had taken over the American right before his rise to power.

Founded on an excitable thirst for independence from their European past, Americans always harbored a tendency towards ultra-individualism. The American Revolution and Constitution coincided with the Age of Enlightenment, igniting a national movement that “guaranteed personal liberty above all, where citizens were officially freer than ever before to invent and promote and believe anything”. Americans’ right to bear arms gave rise to a deeply engrained gun culture and religious freedoms evolved into an exceptionally literal and fantastical religiosity. But the nation’s unraveling didn’t just happen overnight. Rather, the route Andersen takes us on traces the common threads of religious zeal, pseudoscience, and conspiracy theories, from the Salem witch trials and occult Freemasonry of the Enlightenment to the Satanic Panic of the 1980s, New Age theology and apocalyptic paranoia.

As Andersen maps the journey through fantasyland, religion – particularly Christianity – plays a pivotal role in feeding the frenzy. The Puritanical ideology of discipline, austerity and hyperliteracy morphed into The Great Awakening of the 18th century, the formation of Scientology and the Mormon Church, and eventually the contemporary evangelical movement. Charismatic religious leaders like Pat Robertson, Billy Graham, Oral Roberts and Jerry Falwell became charismatic entertainers made famous through television and the Internet.

The freedom to reinvent oneself within an anything-goes personal belief system gave rise to a collection, writes Andersen, of “fantasists, some religious and some out to get rich quick, all with a freakish appetite for the amazing”. Impresarios and hucksters such as P.T. Barnum and Buffalo Bill preceded Walt Disney, Hollywood and an industrial entertainment industry that blurred the lines between reality and fantasy. Oprah Winfrey brought magical thinking to twelve or thirteen million viewers every day, promoting New Age beliefs, alternative medicine (famously, Dr. Oz), anti-vaccine conspiracies, and imaginary energies. Andersen points to the 1980s as a tipping point for the convergence of entertainment and politics. Ronald Reagan’s rise from Hollywood actor to President of the United States seemed like a perfectly natural progression. Talk radio and TV news shows morphed into “politicised show business”.

The digital era that began in the 1990s arrived just in time to amplify what Andersen calls the Kids “R” Us Syndrome where American adults began “playing videogames and fantasy sports, dressing like kids … and even getting surgery to look more like kids”. Gaming boomed into a multibillion-dollar industry creating imaginary worlds that felt realistic and offered an immersive experience for adults who wanted to play like children. Andersen points to Trump as having the ultimate case of Kids “R” Us Syndrome: “spoiled, impulsive, moody, a seventy-year-old brat”.

It didn’t end there. Digital platforms allowed for “even greater immersion in the unreal”. Conspiracy theories and rampant falsehoods that were once on the fringe became mainstream. The mostly unregulated internet and social media platforms became vehicles for spreading fake news and fantastical stories to an audience which had little ability to distinguish between reality and fantasy.

While Andersen admits that “flecks of fantasy are charming condiments in everyday existence,” he wonders if “it’s only America’s destiny, exceptional as ever, to unravel in the Fantasyland fashion”. His final call to action for Americans is to fight for facts and objective truth, find new protocols for information media hygiene, and regain national balance and composure. America’s ability to accomplish this is yet to be seen.

Melanie Trudeau is an English major turned digital strategist. As a dual Canadian/American citizen, she splits her time between rural Vermont and Toronto.