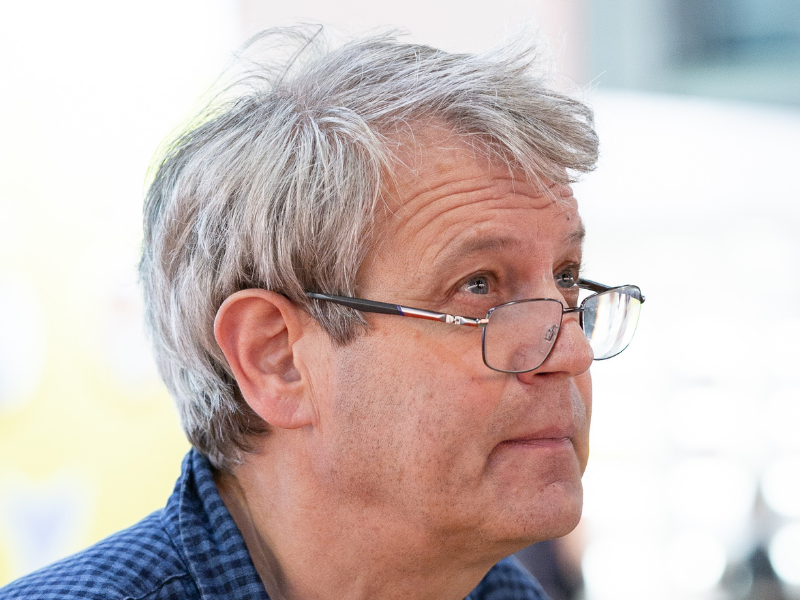 Fame has its peculiar pockets. The man I’m talking to could walk down any street unmolested and you wouldn’t recognise his voice, which comes in polite and clipped, but surprisingly thick, German. But his name is one of the most ubiquitous on the planet. You’d have to look to a certain former President, and his co-author Julia Donaldson to find someone with comparable name recognition.

At 63, Scheffler is best-known as the illustrator of The Gruffalo and its sequel The Gruffalo’s Child. The first alone has sold 13 million copies in 59 editions worldwide, and has been made into a film. It’s a favourite book of Michelle Obama – and just about every parent.

Did his parents encourage him in his chosen career? At first, there was friction. “They weren’t artistic,” he explains. “My father was a businessman and my mother was a housewife. So yes, my father considered me a hopeless case when it came to anything to do with numbers and business. But they were fine in the end.”

Scheffler talks to me over Zoom from his studio in the house he shares with his wife and 13 year old daughter. I can see books ranged beyond him, and everything lit by an appealing skylight.

He looks the epitome of established success – and is. But Scheffler had to find his own way, independently from what his family expected of him. “I always liked drawing,” he recalls. “I could see I had friends who liked my drawings and made them smile – but it took me a while to see that this was my profession. At arts college I found that illustration was what I could do; I knew that by my late twenties.”

What distinguishes Scheffler is the memorability of his illustrations. The illustration of the Gruffalo itself is a magnificently weird creation, full of an outlandish comedy which is only hinted at in Donaldson’s poem. The books simply wouldn’t exist as they are without Scheffler’s ability to delineate absurdity.

And yet they’re also essentially inclusive, creating the illusion that anyone might have a go. That makes him a wonderful person to come into schools and give talks (“If someone says to draw a cow or a dolphin or whatever, I can do that, I’ve been doing this a long time!”) but there’s a quiet professionalism beneath the humour.

How long does it take him to do a double-page spread? “If everything goes well, I will do it in a day and a half or two days but normally I’m not happy! It might depend how much detail I have to do. If there’s a sky or not, or whether I’m using watercolours with colour pencils on top, but a double spread in two days is possible. I hope my publishers won’t read this!”

For a moment, I’m in his world – briefly aware of the technical skill involved. Is he a great gallery-goer? “I’m sad that there were a few exhibitions I wanted to see when corona came. I wanted them extended but I don’t think there’s a direct link to me.”

I ask if he sees positives in the NHS art in the windows now. He is immediately enthusiastic: “I think it’s lovely – especially the chalk drawings on the pavement round here in Richmond. It’s very touching, something which has been around for so long – chalk on a pavement or a wall. It’s very nice and retro.”

There’s a generosity about Scheffler – a love of children. He continues, almost wistfully. “I don’t know whether there are numbers on whether Covid-19 has made children more creative but it would be a good thing if that was the case. Arts education in school isn’t priority in this country anymore, and it’s good if children can create.”

Scheffler’s seems such a one-off career that it seems hard to imagine how it could ever be repeated. But does he have any advice for the younger generation? “I would say it’s not always the first choice you make which is the right thing for you. The situation has changed for young people compared to what people grew up with in the mid-80s. This concept of a job for life is under question, and in some ways it’s harder now to do what I did. But hopefully there will still be authors and will be illustrators. My advice is to be open and try.”