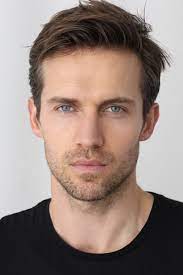 Actor, model, and entrepreneur Andrew Cooper has started a range of businesses, involving fitness, cold-pressed juice, and even pet shop in Notting Hill. Now, he’s taking what he’s learned in the industry and putting it into a new men’s grooming brand called The Fellowship. We talked to Andrew to find out how he’s done it all.

Andrew got his start in modelling, before he started his first business. He remembers how it happened almost by chance.

“I originally came to London to be a singer, and while doing that I ended up falling into the fashion world,” Cooper explains. “I got stopped in the centre of London and asked to join an agency.”

After he entered the fashion industry, Cooper was taking about 200 flights a year travelling the world. In his travels he became inspired by the different ideas and ways of doing things he saw abroad. This sparked his entrepreneurial side, which runs in the family.

“That side of me has always been there,” Cooper continues. “My dad had a lot of businesses too, mostly around food. My Grandad was a butcher, and he took that business, turned it into frozen foods, and ended up selling it on to Campbells.”

Cooper started his first business at the age of 21 when he opened up Mutz Nutz Pet Boutique in Notting Hill. He wanted to transform the pet shop from the typical dark, dusty atmosphere into a high-end, clean, modern business. He launched a line of all-natural grooming products for pets, and the business is still thriving today, 19 years later.

“Being in fashion and film, sitting in a chair putting makeup on and prepping your skin, you begin to understand what works and what doesn’t,” Cooper explains. “I was very specific in how I wanted it to look. I’ve seen many products that are greasy and can lead to bad skin.”

He also noticed that most of the existing products were offshoots from larger brands marketed towards women, so Andrew wanted to make a line of high-performance beauty products aimed at men.

“The immediate reception has been brilliant, way better than we thought it would be, because the product has been in development for quite a long time,” Andrew said.

This is not the first time Andrew has worked with skin and hair care products. His first venture into the sector stemmed from another business of his.

“I have a juice business called JuiceMan, and I was turning the pulp into various byproducts including body scrubs. That was six years ago. As I explored that with the apothecary that we work with, we started to look at other products as well.”

Andrew takes inspiration for his businesses from trends around the world. He believes this approach is effective, but he also warns against assuming something that works in one country will work in another.

“We look at markets like America – and for example New York and LA tend to be ahead. Any time I go to LA and hear something that people in the industry are talking about, I know that I can try that product and I know that we’ll get there in the UK.”

Despite his success, he also recognises and learns from his mistakes. “I have to say I think I slightly got it wrong with my cold-pressed juice business, because I don’t think the climate and the way we can manufacture over here can compare to how they can do it in LA. But with the skincare for sure – we’re moving at quite a quick pace in the UK at the moment.”

The Fellowship’s soft launch has been a major success – and that success took planning. One major decision to make when starting a business is deciding on how much stock to produce, and how to best utilise that initial investment. I ask Andrew how he makes that call.

“I think it’s the hardest part. The problem is that you can’t just flip a switch and turn it around – typically there’s a six-week lead,” Cooper explains. “We were incredibly cautious about whether we’d sell out, so we overbought stock initially. I come from a juice business with a product that goes off in four days, and now we have 18 months, so I’m not too worried.”

Cooper’s years of experience as a business owner and entrepreneur have given him the skills needed to succeed in new ventures like The Fellowship. We asked him to give some advice to up-and-coming entrepreneurs who are just starting their journeys.

“I think you always have to love the market and the space, and you have to understand your niche. I like to always be passionate about the project,” Cooper says.

That passion can sometimes come at a price. According to Cooper, many young entrepreneurs will start businesses which are not viable, and not realise until it’s too late.

“Never start a business until everyone wants to put money in it. I see a lot of people who find funding to be the hardest part, but if you’re finding funding hard there’s a reason,” Cooper explains. “It’s too easy to start a business idealistically, and that can be the problem with passion.”

According to Cooper, early warning signs that a business will not succeed come in the financials and business plan. If they are not clean-cut and easy for investors to get behind, a project can hit a roadblock. His closing advice involves setting a direction for the business and ensuring that your expectations are sound.