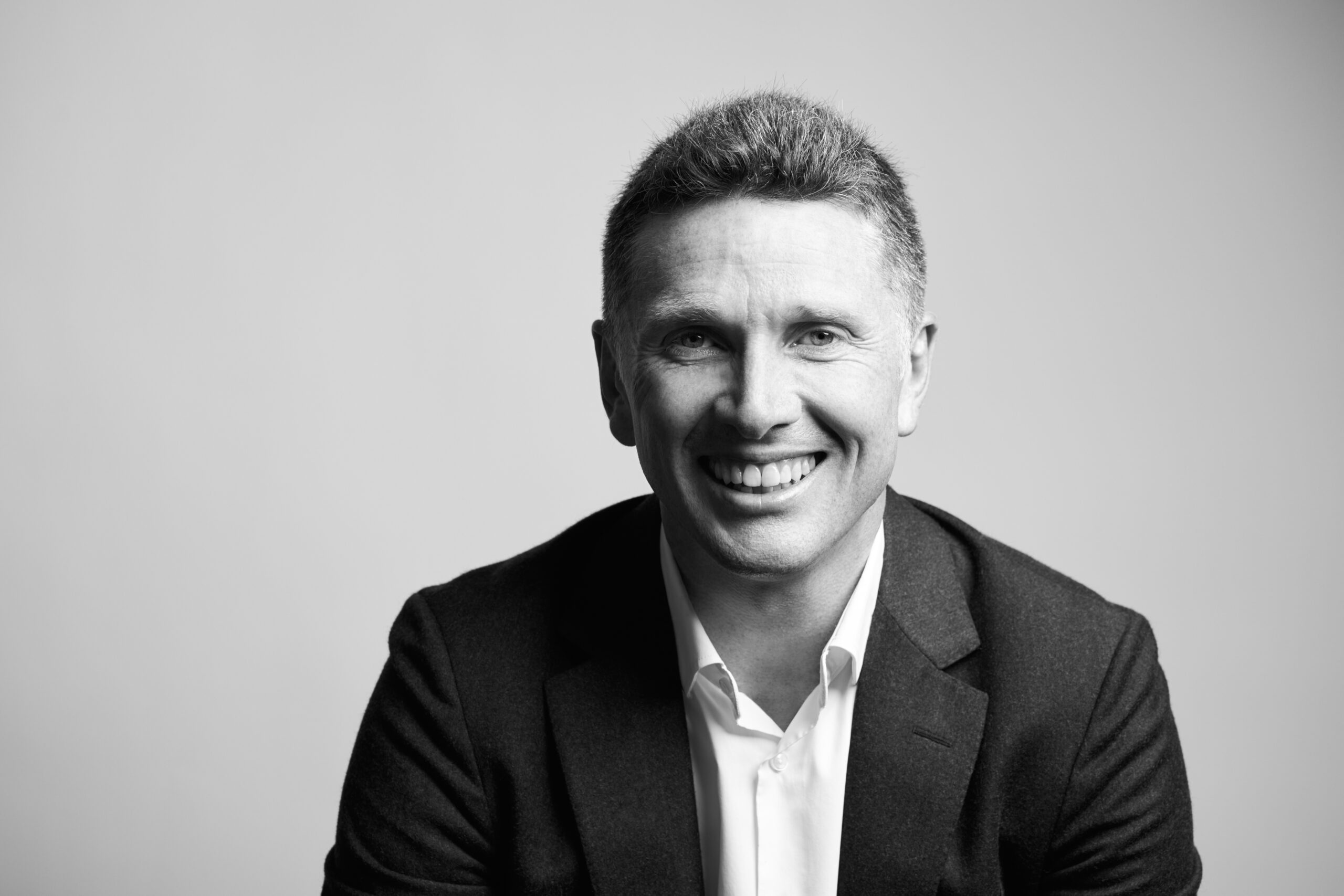 James Connor isn’t exactly your traditional idea of a footballer – but then he’s not necessarily what you’d expect from a wealth manager either. But great businesses always have a certain generosity about them – whether that be a generosity of spirit or energy or imagination. But in the case of Connor Broadley, one senses a central kindness which comes back, you suspect, to Connor himself.

“I come from a working class family,” he tells us. “Dad ran his own heating business and for most of his career was a one-person firm, with mum as his secretary. If the phone went when we were having dinner, it could be a new client and so you’d have to answer the phone.”

The family business did well enough to send Connor to the Mall in Twickenham. As I get to know Connor I will note how he tends to see the best in situations and in people, and this is the case with his schooling: “I like to think I had the richest upbringing. I did have a really working class family: we used to congregate at my nan’s house every day up until the age of 13, with uncles and aunts and cousins. But Zak Goldsmith was in my class at school, and there were a number of high-profile actresses and actors who had sent their children there. That gave me a sense of self-confidence.”

As it turns out Connor would have plenty of reasons for self-confidence – but I never get a sense while talking to him that he has a shred of arrogance. Early on, he realised he was good at sports, although initially there was scepticism from his teachers as to whether football – which in time, would be his chosen sport – would ever pay. “I remember being told: ‘James, you’re good at sports but it will never be a career for you’. This was the pre-professional era, and money hadn’t come into football then.”

In time, Connor would attend Hampton, a former grammar school, where his passion for football deepened. Initially, after unluckily breaking his arm on the night of Republic of Ireland v Romania during Italia 90, Connor thought he had lost the chance to pursue his dream. “But as luck would have it, my nan had moved to Aldershot – which was 92nd in the football league out of 92 clubs. She heard they were doing a last chance saloon trial day, offering seven apprenticeships at the end of it.” Connor secured one, but decided after breaking his arm to do his A-Levels at the same time. When the club folded, Connor again thought a football career might not happen.

Good fortune struck again however, when his former Aldershot manager called the Connor family while James was interrailing in Europe to say he’d moved to Millwall and he’d like him to join the trial. Connor was on the training pitch 48 hours later. “I saw the career that I could have,” he recalls. “Millwall had one of the best youth academies at the time, and it was well known for building the best youth players and selling them, and there were internationals in the youth team there. That was August. By November I had signed a five year contract, a PFA representative came to see me. Dad encouraged me to buy my first house at 18 which is where my interest in personal finance came from. Only Garth Crooks and Paul Gascoigne at that point in history had been offered a five-year contract.”

Connor was a quiet player, and the only privately educated player on the team. Mick McCarthy was the manager at that time. “We were doing a drill – and Mick was a very strong person, and reminded everyone that I wouldn’t be shouting for the ball,” Connor recalls. In this, he also draws a parallel with his current role in wealth management: “I’m much better operating one to one, since this job is about intimate conversations and relationships: it’s not a job which involves talking to large numbers of people. I like to go about my business discretely and be respected for being good at what I do.”

There were other skills which Connor developed at Millwall F.C. “One of the great things about football at all levels is that it attracts a real social mix. And you just love it and embrace it for what it is. Your team mates are all equals. Similarly, entrepreneurs come from all walks of life.”

These skills meant that Connor was better prepared than he perhaps realised at the time, when his career ended through injury. You sense that this was a challenge even for someone with his innate optimism. “It was the defining point in my life,” he says. “It left me so determined to make it at something else. Football is a brutal industry and there’s no support network for people once you exit the game.”

But again Connor would be fortunate. The then chairman of Millwall was Peter Mead – the Mead in the UK’s then largest advertising agency Abbot Mead Vickers. He took Connor under his wing. “Difficult as it was not doing what I wanted to do at 21, being thrust into the creative advertising scene was an amazing education in itself,” Connor recalls.

Gradually, Connor’s career began to evolve. Everything kept coming back to an interest in personal finance, which had been planted in him by his father. “In my twenties, I found myself going to buy the Sunday newspaper to read the personal finance section. By the age of 27, I realised it would play to my strengths. I took a 90 per cent pay cut then but I knew it would suit me and I was prepared to do it.”

It would turn out to be a masterstroke, and again, Connor draws a comparison with football: “One thing you have to have in sport is a good instinct. I find it eyebrow-raising when I hear people making career moves when they have no natural segue into it.”

At first Connor was, in his own words, “just a bag carrier”. He loved the work and built an impeccable reputation, but when a fraud scandal occurred in the firm, Connor decided that he had to preserve his hard-won reputation. Though the scandal had had nothing to do with him, he started his own firm to avoid being tainted by it. “A number of people said: ‘Don’t be implicated in any way. Go and set up your own company and we’ll come with you.”

Again, Connor’s experience in football was formative. “I’d noted as a footballer that when I was approached by financial professionals there was such a lack of integrity – and there is still is in some quarters. We wanted to be respected from day one. We didn’t try and entice previous connections over; we waited for the phone to ring. Our first client fee was £250 and we felt like we’d won the lottery at that point.”

This commitment to integrity sometimes meant giving advice which was in contradiction of their own personal interests. “Our first enquiry was from a longstanding accountancy connection. She’d lost her husband and there was a tabled investment proposal which she didn’t think was in her interests. We were asked to take a look. We had to explain we were in our first few days of business. I took one look at the lady in question and realised she was in no fit state to make a decision as she’d been through a life-changing event – and I know about life-changing events. We told her to stick the money into a bank account to take stock of her life and to talk to us when things had calmed down. She’s now been a client for 15 years.”

The approach has worked. Connor Broadley now has an AuM of £500 million – with an expected £100 million increase to come this year alone. But Connor insists it’s not about the numbers: “Growth at Connor Broadley should come as a consequence of looking after clients, giving them advice and underpinning it with a personal service: it has to be the right kind of growth. Word is spreading and we continue to grow: we attract nice people – people that appreciate a longer term relationship genuinely.” That word ‘genuine’ is overused but it certainly applies to Connor.

So how do you become a client? “The entry point is £1 million of eligible longer term money if we’re going to commit to providing them with an ongoing service.” The firm has a cautious approach. “The way we invest clients’ money is geared to growing purchasing power of our clients’ money by a specified amount above inflation after fees are taken into account across a number of different risk profiles. We don’t purport to be a wealth manager that’s offering double digit returns from one year to the next. We want to look after the wealth people are dependent on to live comfortable lives.”

This is a firm set to grow in the next years, as it brings – starting at the top – some much-needed integrity into the difficult-to-navigate world of wealth management.