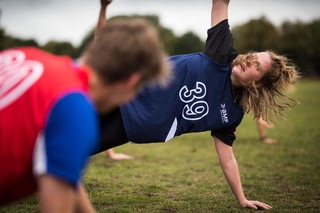 Be Military Fit: the company reinventing the fitness industry

To make things clear from the outset, the writer of this article is no paragon of physical fitness. I generally eat what I want, and I spend much more time in the snooker hall than the gym. So when it came to talking to the good people at Be Military Fit, I initially felt intimidated and wondered whether it would be for me.

So first up, what as it? Well, Be Military Fit – or BMF as it’s known – is an outdoor fitness program designed to get people in tip-top shape while building a community of support and encouragement. Two thirds of their fitness instructors are veterans who bring their experience and resilience to the table, encouraging members to push themselves to reach their goals.

It’s also got star power. Survival expert Bear Grylls co-owns BMF, and during the lockdowns he kept the nation moving with livestreamed fitness classes. As a veteran of the SAS, Grylls is proud of the company’s military heritage and regularly engages with members of the BMF community.

In addition to training around 30,000 members every year, BMF provides training to new army recruits through a partnership with Capita, which handles army recruitment. First, I talk to Ivan Rowlett, who was an officer in the British Army and served in the Parachute Regiment for 12 years before taking his expertise to BMF. He describes for me the way the company’s training programme gives recruits the edge they need to make it through.

“The program we designed for them covers three aspects – mental resilience, performance under pressure, and motivation to train,” he tells me. “The physical component looks at basic conditioning, how to operate via heart rate thresholds, which a lot of these kids aren’t used to, and how to eat to perform.”

Rowlett points out that the mental side of training is just as important as the physical side when dealing with recruits from many different backgrounds: “Often people misunderstand and think the recruits will all be hyper-fit and motivated – but many of them come from tough backgrounds, some from privileged backgrounds, and it’s actually about building that confidence and teaching them how to perform.”

This team-building mindset is fostered by the instructors who have formed communities which have been able to survive many obstacles.“We’ve seen very low attrition rates, even throughout Covid, and a lot of that comes from the more intangible qualities the instructors have in terms of how they lead, inspire, and motivate their members. Those human aspects help develop that team ethos which runs through – they don’t just work out together, they socialise together and change their lives,” Rowlett explains.

The success of the programmes has been extraordinary. According to Rowlett, recruits who trained with BMF were 30 per cent more likely to succeed than a control group which did not undergo the training. They perform trial assessments for new recruits and are currently focused on training more women to succeed in army fitness tests.

So how exactly does it work? BMF holds classes in outdoor spaces across the UK, training thousands of people in sometimes adverse conditions – unless it’s a genuine safety concern, they go out no matter the weather. Eager to know more, I talk with Chairman of the company, Chris St. George, who was an officer in the British Army serving with both the Parachute Regiment and the Coldstream Guards. Now he takes his experience to the world of fitness training.

“I think there’s something around the nature of training – it’s around building teams,” St. George says. “When you train together and endure the weather and conditions outdoors, you get something that you don’t get from a conventional gym or fitness business.”

So much of the value of this training comes from the experiences of the instructor. St. George believes that veterans are well-equipped to help others form communities and train to a higher standard: “I believe the veteran skillset is extremely compatible with the workplace,” he continues. “The very dogged mindset, the discipline and training you learn in the military, and also the ability not just to learn but to train and educate others is something which enables former soldiers to be really great employees.”

The scale of the operation is also impressive. BMF has employed over 3,000 veterans over the years, and many of their franchises across the UK are veteran-owned. St. George and Grylls are committed to maintaining a strong military connection with BMF while also recognising the need for expansion.

“BMF is invested into by veterans, owned by veterans, run by veterans, for veterans, so there’s a real community here,” St. George explains. “We have franchisees in the network who’ve done the hard yards in Iraq and Afghanistan, joined us as trainers on a pretty low salary, then a year or two later become managers. A number of them went into franchise, and now you have some members of the network turning over £50,000 a month whereas a year of two ago they were on a salary of £25,000 – £30,000 pounds.”

According to St. George, the key to a successful shift from military life to business is dependent on how veterans are exposed to the intricacies of the industry. “Sometimes the commercial business mindset can be overwhelming for an ex-military guy, but I think if it’s explained in his language and culture by people who understand him he can move very quickly into business.”

You do not have to be a veteran to be a BMF franchise owner or instructor, and they offer training to new instructors to help them understand the firm’s mindset. The company believes that as BMF expands the best results can be achieved by having a healthy mix of veteran and civilian business partners.

“I’ve been out for just over two and a half years, and I hopefully bring a lot of quality experience to the business, but I’ve still got lots to learn about the commercial world. So I think you want a healthy balance of military and commercial people working together,” St. George adds.

A community mentality is at the centre of BMF’s mission. By using physical fitness as a medium to create strong bonds between members, BMF is much more than just a fitness class. The goal is to improve the lives of members in a holistic way which is not purely physical: “For us, although it is a fitness and training business, the vision was always about improving the lives of the members. The training we do outside is only 50 per cent of it. There’s a huge community where people socialize together, and particularly during Covid, there was an incredible network of support. People would show up online for their fitness sessions to see the same hundred faces they would see in the parks and say ‘Judy, how are you doing?’ ‘John, are you hanging in there?’ so it’s certainly very different to businesses which are only about training. People join BMF as a family.”

BMF has something for everyone. It’s not only for the hardcore, extreme fitness fanatics; it’s a way for people of all fitness levels to come together and improve as a unit. So in spite of my slightly lackadaisical approach to fitness, I couldn’t in good conscience tell readers that anyone can do a BMF fitness class without first trying one for myself.

“Take things at your own pace, stop if you need to,” Graeme said. “We’re not trying to kill you!”

The instructor for the day was Graeme Barr, a funny, charismatic man who immediately put my fears at ease. I introduced myself and told him that I was an absolute beginner.

“Take things at your own pace, stop if you need to,” Graeme said. “We’re not trying to kill you!”

Thankfully I wasn’t the only newcomer there, and the environment was welcoming and encouraging. My breathlessness after the warm-up run, on the other hand, was not so encouraging, but I persevered.

After the first run, we lined up in two files for bodyweight exercises which covered the back, arms, legs, and abs. Graeme demonstrated each exercise clearly – even the ones you might remember from school – and he provided encouragement and advice when we strayed from the path.

To accommodate different levels of fitness, there are three groups: blue, red, and green. We all ran to the same places and performed the same exercises, with more advanced groups having more repetitions or laps to cope with.

Throughout the class, Graeme was conscious of varying abilities, often suggesting substitute exercises when members couldn’t perform a particular one due to previous injuries. He told me of a time when he coached a person with total visual impairment through the same exercise regimen we had just completed, describing each move in detail to accommodate their needs.

During the small amount of down-time between exercises, I had a chance to get to know a few of the members. They were very friendly to us newcomers, and I never detected a hint of ego once during the one-hour session.

Before I knew it, we were doing our cool-down stretches. I had survived. Not only that, but it actually felt good! Granted, some parts were quite difficult, but I never felt that I was being pushed too far outside my comfort zone.

As I nurse my slightly sore legs, I can safely say that anyone who wants to improve their fitness, work on their confidence, or just prove to themselves that they can achieve something should try a trial class with BMF. In fact, I think I’ll go back next week.

Check out Patrick Crowder’s piece on the HR industry here